Home Space and Ufo 2 satellites will narrowly avoid colliding at 32,800 mph over Pittsburgh on... 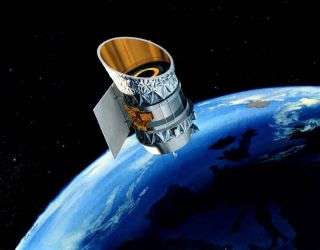 The The Infrared Astronomical Satellite (IRAS) orbits the Earth in this illustration.

Two defunct satellites will zip past each other at 32,800 mph (14.7 kilometers per second) in the sky over Pittsburgh on Thursday evening (Jan. 29). If the two satellites were to collide, the debris could endanger spacecraft around the planet.

One is called the Infrared Astronomical Satellite (IRAS). Launched in 1983, it was the first infrared space telescope and operated for less than a year, according to the Jet Propulsion Laboratory. The other is called the Gravity Gradient Stabilization Experiment (GGSE-4), and was a U.S. Air Force experiment launched in 1967 to test spacecraft design principles, according to NASA. The two satellites are unlikely to actually slam into each other, said LeoLabs CEO Dan Ceperley. But predictions of the precise movements of fairly small, fast objects over vast distances is a challenge, Ceperley told Live Science. (LeoLabs’ business model is selling improvements on those predictions.)

If they did collide, «there would be thousands of pieces of new debris that would stay in orbit for decades. Those new clouds of debris would threaten any satellites operating near the collision altitude and any spacecraft transiting through on its way to other destinations. The new debris [would] spread out and form a debris belt around the Earth,» Ceperley said.

«I confirm there is a close approach of these two satellites around 2339 UTC Jan 29. How close isn’t clear from the data I have, but it’s reasonable that LEOLabs data is better,» McDowell told Live Science.

«What’s different here is that this isn’t debris-on-payload but payload-on-payload,» McDowell said. In other words, in this case two satellites, rather than debris and a satellite, are coming close to one another.

It’s pretty common for bits of orbital debris to have near misses in orbit, Ceperley said, which usually go untracked. It’s more unusual, though, for two full-size satellites to come this close in space. IRAS in particular is the size of a truck, at 11.8 feet by 10.6 feet by 6.7 feet (3.6 by 3.2 by 2.1 m).

«Events like this highlight the need for responsible, timely deorbiting of satellites for space sustainability moving forward. We will continue to monitor this event through the coming days and provide updates as available,» LeoLabs said on Twitter.

Life after death: Man opens up about meeting JesusChrist in...

End of the world: Asteroid before ‘apocalyptic’ US election is prophetic,...