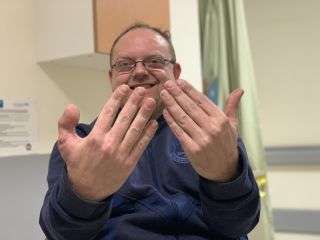 Cobbler David Lee underwent toe-to-thumb reconstruction, meaning surgeons replaced a thumb he lost with one of his big toes. (left)

A cobbler lost his thumb while trimming the heel of a shoe, but thankfully, surgeons were able to replace the missing digit with one of the man’s big toes.

“Straight away, I knew how bad it was, and I just worried that I wouldn’t be able to fix shoes again,” Lee said in a statement. “I cried my eyes out when I thought about it, as I thought I was going to lose my shop.”

But after being referred to Royal Derby Hospital in Derby, England, Lee learned that his thumb could be replaced using a rare procedure called “toe-to-thumb reconstruction.”

“There are lots of different ways to reconstruct thumbs, but using the big toe gives the best functional and cosmetic benefits, as it is the thing most like a thumb on the body,” Jill Arrowsmith, one of the hand surgeons who performed Lee’s operation, said in the statement. Surgeons offer the procedure only to patients who have lost most of the thumb, “usually down to the knuckle,” Arrowsmith added.

“As soon as it was put to me that attaching my toe gave me a chance to carry on my job, I instantly said let’s do it,” Lee said.

Toes serve as a near perfect substitute for fingers because both digits share a similar structure and range of motion, as well as sensitive skin and nails for pinching, according to a 2010 report in the Journal of Hand and Microsurgery. For patients that lose their entire thumb, only a full toe transfer can provide them “optimal rather than adequate function.” Either the big toe or second toe can be used for the transfer, although the bulbous big toe better matches a thumb’s appearance and function.

Removal of the big toe does leave an obvious deformity in the donor foot and can reduce the patient’s power when pushing off from the floor, but generally, patients continue to walk normally after the procedure. In the end, the bizarre procedure is often worth the risk, according to the 2010 report. “For it is the loss of the thumb—’the king of the digits’—that most debilitates the hand, and therefore best justifies the great skill and rehabilitative effort attendant to the procedure,” the authors noted.

Lee underwent the procedure five days after his accident, and the operation took 10 hours to complete. During the surgery, Arrowsmith and her colleagues amputated one of Lee’s big toes and affixed the digit to his hand. Specialists at the hospital then led Lee through months of rehabilitative therapy to restore his hand function and grip strength to normal levels.

“Now, a year on, I’m back in the shop and doing what I love again,” Lee said in a video released by the hospital.

Plants ‘Scream’ in the Face of Stress