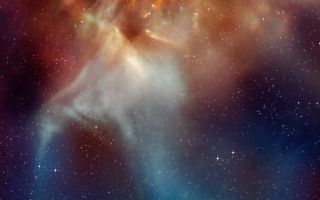 HONOLULU —The giant red star Betelgeuse might be harboring a gruesome secret in its past. A new model posits that the prominent night-sky object was once two stars, until the larger star ate its smaller companion. And that could explain several of Betelgeuse’s peculiar properties.

Betelgeuse is a whopper of a star, with a diameter of 600 million miles (965 million kilometers), bigger than the orbit of Mars, according to the National Radio Astronomy Observatory. At a relatively close distance of 520 light-years from Earth, Betelgeuse is also one of the few stars whose surface features can be resolved with telescopes.

By watching spots move on Betelgeuse’s surface, different researchers have calculated that the star’s rotational rate is somewhere between 11,000 and 33,000 mph (17,700 to 53,000 km/h), Manos Chatzopoulos, an astronomer at Louisiana State University in Baton Rogue, said during a session on Monday (Jan. 6) at the 235th meeting of the American Astronomical Society here.

This is surprising because as a star ages and enters the red giant phase of its life, like Betelgeuse has, the star expands and its rotation typically slows down, much like an ice skater pushing out their arms to slow their spin, Chatzopoulos told Live Science.

Betelgeuse is also a runaway star, meaning that the object is zipping along at a mind-boggling speed, in Betelgeuse’s case, 67,000 mph (108,000 km/h) relative to background stars in the Milky Way, he added.

“For such a famous star that everyone knows and loves, nobody has tried to explain the combination of these two things,” Chatzopoulos said, referring to its odd rotation rate and speed. “So how do you put together these two facts?”

A clue might come from where Betelgeuse is thought to originate, a star-dense region known as the Orion OB1a association. Along with colleagues, Chatzopoulos has suggested that gravitational interactions with the many stars in that region could have flung Betelgeuse away at high speed millions of years ago, explaining the star’s hyper-velocity.

Betelgeuse might have also had a smaller companion, the researchers posited, which got tossed out along with it. As Betelgeuse aged and expanded, it might have engulfed this partner, which would have stirred up Betelgeuse’s outer layers “like stirring up coffee with a stick,” Chatzopoulos said, and increased its rotation rate.

He and his collaborators have run sophisticated stellar-evolution computer models incorporating all these ideas. The results that best fit Betelgeuse’s observed features suggested it was once two separate stars, one with 16 times the sun’s mass and another with four times the sun’s mass. The researchers are preparing to submit their research to The Astrophysical Journal.

The researchers’ models were also able to match the amount of nitrogen seen in Betelgeuse’s atmosphere, which is unusually high. This is a potentially corroborating piece of evidence, because the stirring of a companion star might have dredged up nitrogen from Betelgeuse’s center, Chatzopoulos said.

Earlier work by Chatzopoulos’ former Ph.D. advisor offered the idea that Betelgeuse was formed as the merger of two stars. Chatzopoulos said that his new research expands on that prior idea and adds in specific simulations to account for the red giant star’s rotation and speed.

“I think it’s interesting,” said Andrea Dupree, a senior astrophysicist at the Harvard-Smithsonian Center for Astrophysics who was not involved in the work. Dupree and her colleagues previously proposed that Betelgeuse may have swallowed exoplanetary companions. But she said it would be useful to take a closer look at Betelgeuse’s properties, some of which haven’t been measured in as long as 30 years, before saying anything definitive.

Betelgeuse has lately been in the news over the possibility that it could imminently burst as a spectacular supernova. Should Chatzopoulos’ research provide the new explanation of Betelgeuse’s birth, does it mean anything about the star’s death?

Chatzopoulos doesn’t have an answer to that. But if his idea is correct, he said it could mean Betelgeuse was rejuvenated at some point in the past with fresh material from the companion that the star consumed. That could have led scientists to underestimate Betelgeuse’s age, meaning it’s not set to explode anytime soon.

As an astronomer specializing in supernovas, he finds this perhaps a bit disappointing, he said. “All of us who study supernova wish it would happen in our lifetime,” he said.