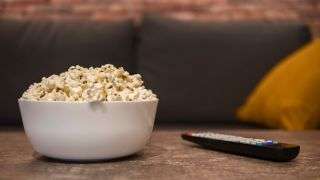 Getting popcorn stuck in your teeth is usually just an annoyance, but for one man in England, it led to open-heart surgery, according to news reports.

The 41-year-old man, Adam Martin, was eating popcorn while watching a movie at home last September when a husk got lodged in his teeth, according to local news outlet Cornwall Live.

The food proved difficult to dislodge. In a desperate attempt to remove the husk, Martin prodded at his gums with an array of household items, including a pen cap, a toothpick, a piece of wire and a metal nail, Cornwall Live reported.

Soon afterward, Martin developed a toothache but didn’t go to the dentist. Then, he developed flu-like symptoms, including night sweats, fatigue and headaches. These symptoms prompted him to go to the doctor, where he was diagnosed with a heart murmur.

Later, he developed a blood blister on his toe called a Janeway lesion, something that can be a sign of endocarditis, an infection of the inner lining of the heart.

Near the end of October, 2019, Martin was admitted to the hospital, where doctors determined that he indeed had endocarditis and that the infection had seriously damaged his heart valves. Martin underwent a 7-hour open-heart surgery to replace his damaged valves.

“My heart was not properly working anymore. It was essentially wrecked. The infection had eaten the valves away,” Martin told Cornwall Live.

Martin said that poking at his gums to remove the popcorn husk was the only thing he could think of that could have caused his infection. “I am never eating popcorn again,” he added.

He believes that a simple trip to the dentist may have saved him from this ordeal. “If I had gone to the dentist in the first place, then none of this would have happened.”

His wife, Helen Martin, agreed and encouraged people to go to the dentist in a recent Facebook post.

“Your gums are a bacterial highway to your heart,” Helen Martin wrote. “Any sign of toothache, bleeding gums, abscess, get it checked out!”