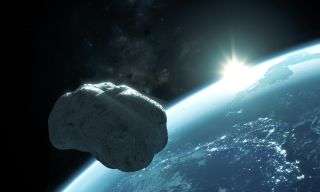 A small asteroid has been orbiting Earth for 3 years, astronomers say. Meet our newest minimoon.

Tumbling through Earth’s increasingly crowded orbit are about 5,000 satellites, half a million pieces of human-made debris and only one confirmed natural object: the moon. Now, astronomers working out of the University of Arizona’s Steward Observatory think they may have discovered a second natural satellite — or at least a temporary one.

A minimoon, also known as a temporarily captured object, is a space rock that gets caught in Earth’s orbit for several months or years before shooting off into the distant solar system again (or burning up in our planet’s atmosphere).

While astronomers suspect there is at least one minimoon circling Earth at any given time, these tiny satellites are rarely discovered, likely because of their relatively small size. Until now, only one confirmed minimoon has ever been detected: a 3–foot-wide (0.9 meters) asteroid called 2006 RH120, which orbited Earth for 18 months in 2006 and 2007.

Now, there may be a second. Kacper Wierzchos, a senior research specialist for the NASA and University of Arizona-funded Catalina Sky Survey, announced the discovery of a new temporarily captured object via Twitter yesterday (Feb. 25). The object appears to measure between 6.2 and 11.5 feet (1.9 to 3.5 m) in diameter and has a surface brightness typical of carbon-rich asteroids, Wierzchos wrote.

According to an orbital model by amateur astrophysicist and San Francisco high school physics teacher Tony Dunn, the potential minimoon has likely been trapped by Earth’s gravity for about three years now and could make its exit in April 2020, resuming its regularly scheduled journey around the sun.

In a perfect universe, our departing minimoon would fly off and become trapped by the moon’s gravity, creating an even rarer class of object: a moonmoon. Sadly, moonmoons remain only theoretical, and our possible new minimoon comes with some caveats of its own. While the object’s existence has since been confirmed by several other observatories, further analysis is required to say for certain that the object is an extraterrestrial rock and not a large shard of space junk. Hopefully, we’ll have an answer before April. A complex, multicomponent release from the galaxy NGC 7130 has been...

Life after death: Man telepathically spoke to God after leaving his...