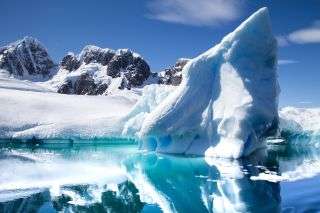 Pieces of Mars made their way across the solar system to Antarctica, where they were discovered in the 1980s.

A bit of 4-billion-year-old rock blasted off the Martian surface about 15 million years ago and eventually landed in Antarctica, where explorers found it in 1984. In the decades since, organic compounds found in that meteorite have been sources of controversy: Did they come from Mars, or did the meteorites get contaminated on Earth? Now, a team of Japanese researchers has reexamined the meteorites, and say they found traces of ancient oceans, rich in useful carbon and nitrogen — key ingredients for life.

The meteorite, known as Allan Hills 84001, after the location where it was first discovered, has long been known to contain organic materials. The hunk of space rock has been the subject of paper after paper after paper debating whether those materials came from Earth or Mars. There’s even been a controversial claim, as Live Science sister site Space.com reported in 2016, that evidence for actual Martian life is hiding out in the rock.

The trouble was that researchers could never rule out the possibility that organic molecules from Antarctica got mixed up with the meteorites during their centuries locked in ice. Alternatively, the meteorite could have been contaminated with organic matter in a laboratory.

But now the researchers have taken extraordinary pains to rule out those possibilities. Their results suggest the organic compounds come from Mars — and for the first time show the meteor also contains nitrogen-bearing organic materials. Most nitrogen we’ve discovered  on Mars is locked up in inert nitrogen gas (N2) or in harsh chemicals in the soil that break down organic matter, the researchers wrote. These newly-discovered organic nitrogen compounds in the carbonate suggest that if life did exist on Mars, it would have had access to the same forms of nitrogen that Earthly life relies on.

Together, the researchers wrote in the paper, which was published April 24 in the journal Nature Communications, these findings amount to the signature of an groundwater environment with plenty of potentially life-giving organic material.

The researchers studied the meteorites in a “class-100 clean lab,” an environment where everyone wears head-to-toe bodysuits and the airflow is controlled to keep particulates from floating around. (Typically, such labs are used when manufacturing delicate advanced technologies like spacecraft or certain pharmaceuticals.) Past research into Allan Hills 84001, such as a 1999 study in the journal Advances in Space Research that argued the organics likely came from Mars, took place in more typical laboratory environments.

In their ultraclean environment, the scientists peeled off tiny grains of carbonate — the compound in the 4-billion-year-old meteorites. Then, they blasted the surfaces of the grains with a beam of focused charged molecules, or ions, to remove surface contaminants. The material underneath that surface layer, the researchers argued, represents a close approximation of the chemicals inside the meteorites before they were exposed to Earth.

They found levels of organic nitrogen far higher than could easily be explained by contamination from Antarctic ice, suggesting the nitrogen-bearing organic material entered the rock as it formed. The carbonate in Allan Hills 84001 formed in water, researchers believe. On Earth, carbonates like limestone and calcite are also the dried-out remnants of old water sources. Taken together, these lines of evidence suggest that the organic nitrogen compounds were plentiful in early Martian oceans.

That’s important because “nitrogen is an essential element for all life on Earth, as it is necessary for protein, DNA, RNA and other vital materials,” the researchers wrote.

These results fit with other evidence from the Red Planet. NASA’s Curiosity rover and Viking landers found traces of organic material on the Martian surface. But rover instruments can’t do the battery of tests that an Earthbound laboratory can,, so the rover data doesn’t tell scientists where the organic compounds came from, how old they are or how they formed. This research, if borne out, suggests that at one point, when Mars was covered in oceans, those oceans flowed with organic matter.

All of that said, organic materials form in many lifeless places in the solar system, most notably comets. There’s even evidence for organic material in the dust floating between stars, Space.com reported in 2011. So whether these apparent ancient, organic-rich oceans on Mars ever hosted life is still a mystery.