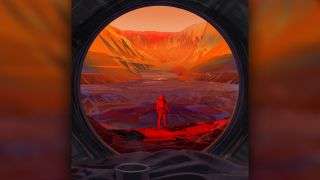 For astronauts preparing to spend a long summer vacation on Mars, hats and umbrellas might not be enough to protect them from the sun’s harsh rays.

And just like beachgoers slathering on sunscreen, explorers on the moon or Mars may one day shield themselves using creams containing a new bioengineered material called selenomelanin, created by enriching the natural pigment melanin with the metal selenium.

Outside the Earth’s protective magnetic field, humans are exposed to many types of dangerous radiation, according to NASA. This includes damaging ultraviolet radiation, X-rays and gamma rays from the sun, as well as superfast subatomic particles called galactic cosmic rays that originate outside our solar system.

The invisible accumulation of DNA breakage caused by these space rays can lead to cancer and, in high doses, radiation poisoning and death. Traditional countermeasures, such as lead or water shielding, tend to be heavy and greatly increase the cost of a space mission.

Enter melanin, a broad class of naturally occurring pigments found in animals, plants, fungi and bacteria. Some types of melanin provide humans with their wide range of skin, hair, and eye hues and help protect us against the sun’s ultraviolet light.

“Melanin is ubiquitous and enigmatic,” Nathan Gianneschi, a biochemist at Northwestern University in Evanston, Illinois, told Live Science. «We don’t fully understand it.»

— This is the most violent object in the solar system

Animal melanins are divided into two main forms, eumelanin and pheomelanin, according to a 2014 paper in the New Journal of Science. Eumelanin is responsible for conferring black or dark brown colors like that of skin and hair, while pheomelanin contains the element sulfur and tends to be reddish or yellowish, and is found in red or auburn hair and in human lips.

Pheomelanin also absorbs X-rays much more efficiently than eumelanin. Knowing this, Gianneschi and his colleagues took some pheomelanin derived from red rooster feathers and tried to see if they could make it even more protective.

Instead of sulfur, the researchers swapped in the element selenium, which sits just below sulfur on the periodic table of elements and is known to play a role in cancer prevention in organisms. By doing so, they created selenomelanin, which has never before been seen in nature.

During lab experiments, skin cells treated with selenomelanin were able to shrug off doses of X-ray radiation that would be lethal to a human being. The selenomelanin was absorbed into the cells and formed what Gianneschi called “microparasols,” or tiny shields around the cells’ nuclei, where DNA is stored. The cells took on a naturally brown or tanned color when they absorbed selenomelanin, Gianneschi said.

Additional tests demonstrated that engineered bacteria fed selenium could produce selenomelanin, meaning the substance could be manufactured in space. The results were published July 8 in the Journal of the American Chemical Society.

“I love it,” Radamés J.B. Cordero, a microbiologist who studies melanins at Johns Hopkins University in Baltimore, Maryland, and who was not involved in the work, told Live Science. “The authors present a neat example of how biology can inspire the design of a melanin analog.”

The material will still need to be tested on human beings and in space to see if it confers the same protection, he added. Gianneschi has already been contacted by other groups interested in studying his team’s intercellular sunscreen.

The fact that it is lightweight and can be created from basic organic chemicals during a space mission rather than lugged from Earth makes it quite attractive, Gianneschi said. Selenomelanin could even be incorporated into clothing, such as the lining of a spacesuit, where it could work much like the microparasols to confer continuous protection, he added.

He and his colleagues are now wondering if the chemical they synthesized might already be present in nature, perhaps in fungi that live in high-radiation environments.