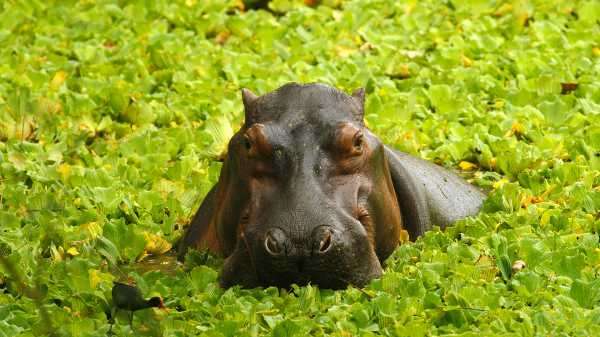 Hippos are native to sub-Saharan Africa, but a once captive herd of escaped animals is right at home in northwestern Colombia.

Hippos that were brought to Colombia decades ago by Pablo Escobar, the notorious cocaine kingpin, are now thriving in the country’s river ecosystems. Scientists even suspect that river habitats may benefit from the presence of these non-native hippos, with the large herbivores filling an ecological niche that has been vacant in the region for thousands of years.

Many species of big plant-eaters that once roamed the planet were driven to extinction beginning about 100,000 years ago, with extinctions peaking toward the end of the Pleistocene Epoch (2.6 million to 11,700 years ago). As big herbivorous animals   vanished, their absence starved the soil of nutrients, altered plant growth and even affected water flow and availability, researchers wrote in a new study.

However, newly introduced nonnative herbivores — such as Escobar’s “cocaine hippos” — could revitalize and enrich such ecosystems, and could do so in locations around the world, the scientists reported.

Escobar imported four hippos from America in 1981, for a private zoo at his hacienda near Medellín, Colombia. After his drug empire collapsed, the hippos escaped and have been breeding in the wild ever since, now numbering 80 individuals or more, Scientific American reported in February.

For the new study, scientists analyzed the ecological impacts of 427 large herbivores weighing at least 22 lbs. (10 kilograms) that lived between 130,000 years ago and the present day, to see if ailing ecosystems that were once populated by herbivores could be restored to health if big herbivores came back.

In Colombia, the renegade hippos “present a chimera of multiple extinct species’ trait combinations,” the study authors wrote. In other words, the hippos’ impact on their adopted habitat — how much and what type of plants they eat; how much they move around within their range; how they digest their meals; and the quantity of nutrients they return to the habitat as poop — was once performed by a variety of sizable native plant eaters.

Before Escobar’s hippos invaded Colombia’s waterways, the last big herbivore to roam that part of South America was the giant llama Hemiauchenia paradoxa, or large-headed llama, which vanished around 11,000 years ago. The closest extinct equivalent to a modern hippo is the large-headed llama, the scientists wrote in the study. However, the researchers found that hippos were also very similar to an extinct semiaquatic hoofed beast called Trigonodops lopesi, “in all traits but fermentation type,” according to the study.

This means that hippos may graze on riverbanks in a manner that echoes the habits of extinct llamas, but may distribute nutrients — via poop — in a manner that is more similar to another extinct river animal, the researchers reported.

For now, the ecological impact of Escobar’s hippos is still largely unknown. But some experts have suggested that the hippos aren’t such a boon for the environment. In fact, they may upset the balance of Colombian ecosystems, because they produce significant quantities of dung that can affect the water’s oxygen levels, according to Scientific American.

The findings were published online March 23 in the journal Proceedings of the National Academy of Sciences.