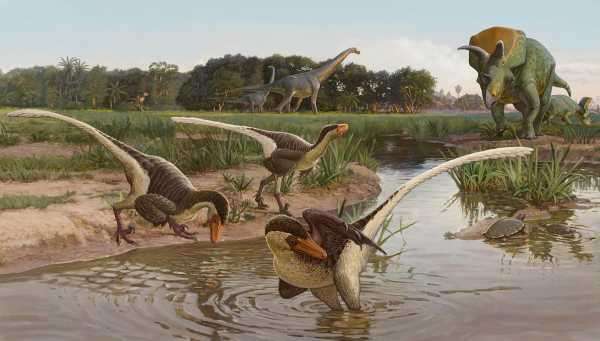 An illustration showing the newfound raptor dinosaur Dineobellator notohesperus, which lived at the end of the Cretaceous Period in what is now New Mexico. The ceratopsid (horned dinosaur) Ojoceratops and sauropod Alamosaurus are in the background.

About 70 million years ago, a cousin of Velociraptor got in a brawl with a larger predator that left it with a nasty rib injury. But this dinosaur, a feathered hypercarnivore, lived to tell the tale, as its rib showed signs of healing, a new study finds.

The newfound species, dubbed Dineobellator notohesperus, had another injury; a gash on its sickle-shaped claw that “we hypothesize may have been made by another Dineobellator,” said study lead researcher Steven Jasinski, a paleontologist and head of the Paleontology and Geology Section at The State Museum of Pennsylvania.

“If they lived in packs, this [gash] could have been fighting between members, or could have been due to fighting over potential mates,” Jasinski told Live Science in an email. “It’s also possible this was a fight between two Dineobellator over food, or even one trying to kill another to eat it.”

The dinosaur’s fossils were discovered in the San Juan Basin of northwestern New Mexico during the summer of 2008. Given the dinosaur’s impressive injuries, the scientists named it Dineobellator notohesperus (pronounced “dih NAY oh – BELL a tor” “Noh toh – hes per us”), by combining the Navajo word “Diné” (Navajo people) with the Latin word “bellator” (warrior). Its species name comes from “noto” and “hesper,”  the Greek words for “south” and “west,” respectively, in reference to the American Southwest. 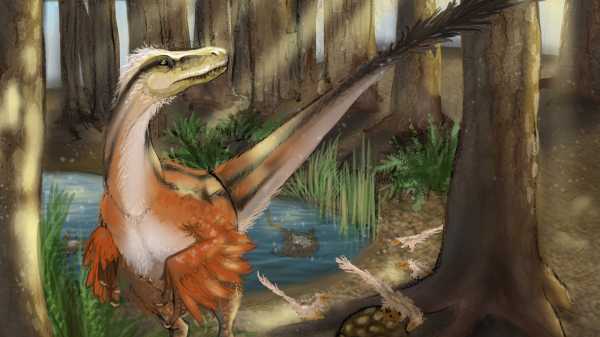 D. notohesperus belongs to the dromaeosaurid family, a group of small to medium-size feathered carnivores, including Velociraptor, that lived during the Cretaceous period (145 million to 65 million years ago). After analyzing the bones, paleontologists determined that D. notohesperus would have measured about 6.5 feet (2 meters) long, about 3 feet (1 m) tall at the hip and weighed about 40-50 lbs. (18-22 kilograms), making it about as heavy as a female poodle. Remarkably, features on its forearm revealed that D. notohesperus is “one of the rare dinosaurs from North America that shows evidence of feathers,” Jasinski said.

D. notohesperus was hypercarnivorous, meaning that it almost exclusively ate meat. If these dinosaurs lived in packs, as evidence of other raptors suggests, it’s possible that a pack of these warrior dinosaurs “would have been able to attack and take down prey several times larger than them,” Jasinski said.

The fossils also revealed that D. notohesperus was strong for its size. It had strong muscles on its humerus, or upper arm, and the nearly 4-inch-long (10 centimeters) claws on its hands and feet could have closed strongly around prey, Jasinski said. Its hands would have had “a very strong grip for grasping things,” he added.

The vertebrae near the base of its tail curved inward, suggesting that D. notohesperus had increased agility, which would have helped it hunt prey.

“Other members of this group of dinosaurs tend to have straight, stiff tails that are reinforced with rod-like features made of bones and tendons,” Jasinski said. But the newfound dinosaur appears to have had a highly mobile tail. “If you think of videos of cheetahs pursuing prey like gazelles, their tail tends to stay relatively straight but whip around as the cheetah quickly changes direction. Dineobellator would have had a similar ability to quickly change directions during pursuit,” he said.

However, the assessments of this creature’s strength and tail may be premature, said David Evans, chair of vertebrate paleontology and deputy head of the Department of Natural History at Royal Ontario Museum in Canada, who was not involved in the study.

“Ultimately, the specimen is still very fragmentary and leaves a lot of questions, including the strength of the functional inferences in the study,” Evans told Live Science in an email. “Although the bones suggest Dineobellator may have had a suite of special adaptations that could be related to predation for instance, the scrappy nature of the fossils makes it difficult to evaluate the significance of the seemingly unique shapes of its bones.”

However, the bones do reveal D. notohesperus’ roots. Based on the dinosaur’s anatomy, “we have determined that Dineobellator is closely related to dromaeosaurids from Asia,” meaning that D. notohesperus is a descendant of migrants from Asia, Jasinski said.

The study was published online March 26 in the journal Scientific Reports.

How do the new coronavirus tests work?