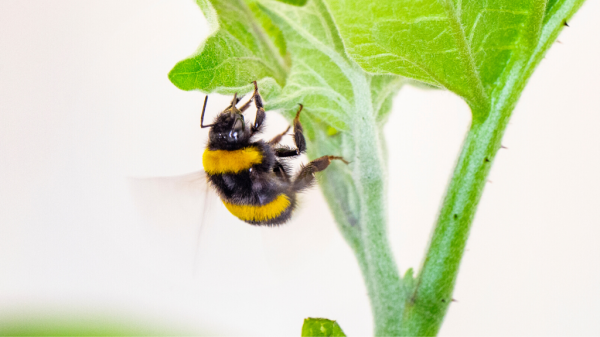 When their pollen supply runs short, bumblebees bore tiny half-moon-shaped holes in the leaves of flowering plants, causing blooms to appear weeks ahead of schedule.

Bee-bitten plants bear flowers about two weeks to a month sooner than untouched plants, according to a new study, published today (May 21) in the journal Science. Researchers attempted to recreate these bee-bite patterns using metal forceps and a razor, but even then, the damage inflicted by bees boosted flower production more effectively than the scientists could; bee-bitten plants bloomed eight to 25 days before the artificially damaged ones did, depending on the plant species.

Some plant species flower early in response to drought, or in response to infections caused by certain pathogens, but few studies have explored how animal behaviors might prompt plants to bloom early, said study author Mark Mescher, a professor of environmental systems science at ETH Zürich. Mescher and his coauthor Consuelo De Moraes, a professor of biocommunication and ecology at ETH Zürich, spotted bumblebees munching on leaves during an unrelated experiment, and they wondered why.

“It started really with observing the behavior,” Mescher said. Other researchers told the team that they’d also observed bees biting leaves, anecdotally, but no formal studies had probed why the insects did it, he said.

In early laboratory experiments, buff-tailed bumblebees (Bombus terrestris) appeared to ramp up this biting behavior when deprived of pollen, a key food source for both bee larvae and the worker bees themselves, the authors noted. To test the hypothesis, the team deprived one group of worker bees of pollen for three days, while a different group was provided “abundant pollen resources.” When released into enclosures full of flowerless tomato and black mustard plants, the deprived bees began nibbling at the leaves with gusto. The satiated group, in contrast, inflicted only minor amounts of leaf damage.

To confirm that the hungry bees weren’t simply eating the leaves, or carrying bits back to their hive, the authors placed paper cones beneath the plants to catch falling debris. Leaf bits accumulated in the cones, and no leaf residue appeared back at the hive, they noted. The bee-inflicted damage resembles tiny half-moons, carved by the insects’ mandibles, or pinprick holes poked out with their proboscises (tubular mouthparts), De Moraes said. “But it’s quite quick,” with each cut only taking a second or so to complete, she added.

The team observed this biting behavior in both their laboratory bees and wild colonies that visited plants housed on rooftops at the ETH Zürich campus. In the wild bees, the team noted that biting behavior dropped off once the outdoor plants began to flower, bolstering the idea that the bees damage leaves when their available pollen supply runs low.

While several species of wild bumblebees, including B. terrestris and B. lucorum, ravaged the flowerless foliage, honeybees and common furry bees that visited the roof would not, Mescher noted. “The honeybees just ignored the plants that didn’t have any flowers,” he said. “Who knows, but I’d be surprised if there were other pollinators [besides bumblebees] that were doing this.”

But why would only bumblebees beat up plants to boost their flower supply? That the scientists don’t know yet, they said. Bumblebees do exhibit so-called “nectar-robbing” behaviors, where they slice into plant parts that house nectar beyond the confines of a flower, and the leaf-biting behaviors may be related to that, Mescher said. But we don’t know for sure yet.

Looking forward, the team plans to study precisely how bee-inflicted damage drives plants to bloom early, and whether the same biochemical changes occur in plants subjected to drought, pathogens or other environmental stressors. It may be that fatty acids in bumblebee saliva trigger a reaction in flowering plants, as is true of some caterpillar species, De Moraes said. Alternatively, the bees may release some unknown chemical cue, or else damage the leaves in a highly specific way that scientists cannot yet replicate, she added.

If cues from bees can accelerate flowering, “scientists might realize a horticulturist’s dream by deciphering the molecular pathways through which flowering can be accelerated by a full month,” Lars Chittka, a professor of Sensory and Behavioural Ecology at the Queen Mary University of London, wrote in a letter in the journal Science accompanying the new paper.

“An encouraging interpretation of the new findings is that behavioral adaptations of flower visitors can provide pollination systems with more plasticity and resilience to cope with climate change than hitherto suspected,” he wrote. In other words, as climate change alters when various plants bloom, understanding how bumblebees influence flowering could help farmers manage their crops.