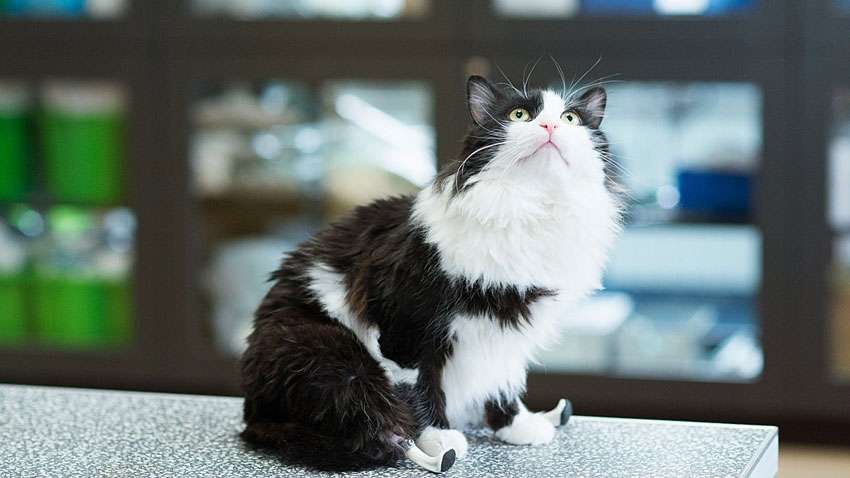 A cat named Pooch, like all other cats, liked to walk, climb trees, follow neighboring dogs and hunt birds. But once Pooh got under the car – his hind legs moved the wheel. The cat had enough strength only to crawl to the doorstep of the nearest house, where people found him.

Without messing around, they called the veterinary service. Pooh was lucky – he fell into the hands of Dr. Vladislav Zlatinov. Often, with such injuries, the unfortunate animal is euthanized, but the veterinarian decided to carry out a difficult operation – to amputate the hind limbs of the animal and put titanium prostheses in their place.

Soon, implants made specifically for the Pooh were installed in the bone, and on top of them are worn head-covers, which will need to be changed during wear.
Contrary to the concern of doctors and owners, Pooh accepted his artificial limbs without any problems – having brought to them in a few days, a cheerful cat began to play and walk, and then run. Now Pooch jumps without problems on chairs, jumps over obstacles and even stands on the hind “paws” during the game.
Pooch lives in a shelter in Sofia, but let’s hope that when you read these lines, the cat found owners who will take care of him all his life – Pooh needs to regularly visit a veterinarian to check implants.
Vladislav Zlatinov hopes that his unique operation (like only a few in the world) will be an example for other veterinarians, and animals that have lost their limbs will be able to get back on their paws.