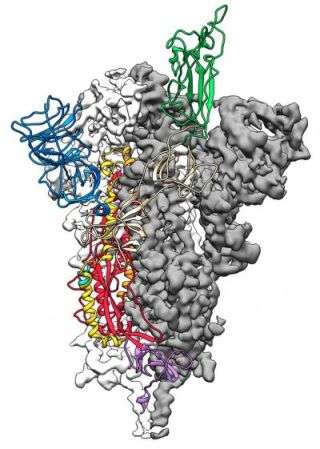 This is the 3D atomic scale map or molecular structure of the SARS-2-CoV protein “spike” which the virus uses to invade human cells.

Researchers worldwide are racing to develop potential vaccines and drugs to fight the new coronavirus, called SARS-Cov-2.  Now, a group of researchers has figured out the molecular structure of a key protein that the coronavirus uses to invade human cells, potentially opening the door to the development of a vaccine, according to new findings.

Previous research revealed that coronaviruses invade cells through so-called “spike” proteins, but those proteins take on different shapes in different coronaviruses. Figuring out the shape of the spike protein in SARS-Cov-2 is the key to figuring out how to target the virus, said Jason McLellan, senior author of the study and an associate professor of molecular biosciences at the University of Texas at Austin.

Though the coronavirus uses many different proteins to replicate and invade cells, the spike protein is the major surface protein that it uses to bind to a receptor — another protein that acts like a doorway into a human cell. After the spike protein binds to the human cell receptor, the viral membrane fuses with the human cell membrane, allowing the genome of the virus to enter human cells and begin infection. So “if you can prevent attachment and fusion, you will prevent entry,” McLellan told Live Science. But to target this protein, you need to know what it looks like.

Earlier this month, researchers published the genome of SARS-Cov-2. Using that genome, McLellan and his team, in collaboration with the National Institutes of Health (NIH), identified the specific genes that code for the spike protein. They then sent that gene information to a company that created the genes and sent them back. The group then injected those genes into mammalian cells in a lab dish and those cells produced the spike proteins.

Next, using a very detailed microscopy technique called cryogenic electron microscopy, the group created a 3D “map,” or “blueprint,” of the spike proteins. The blueprint revealed the structure of the molecule, mapping the location of each of its atoms in space.

“It’s impressive that these researchers were able to get the structure so quickly,” said Aubree Gordon, an associate professor of epidemiology at the University of Michigan who was not a part of the study. “It’s a very important step forward and may help in the development of a vaccine against SARS-COV-2.”

Stephen Morse, a professor at Columbia University’s Mailman School of Public Health who was also not a part of the study agrees. The spike protein “would be the likely choice for rapid development of vaccine antigens” and treatments, he told Live Science in an email. Knowing the structure would be “very helpful in developing vaccines and antibodies with good activity,” as would producing higher quantities of these proteins, he added.

The team is sending these atomic “coordinates” to dozens of research groups around the world who are working to develop vaccines and drugs to target SARS-CoV-2. Meanwhile, McLellan and his team hope to use the map of the spike protein as the basis for a vaccine.

In theory, the spike protein itself “could be either the vaccine or variants of a vaccine,” McLellan said. When you inject this spike-protein-based vaccine, “humans would make antibodies against the spike, and then if they were ever exposed to the live virus,” the body would be prepared, he added. Based on previous research they did on other coronaviruses, the researchers introduced mutations, or changes to create a more stable molecule.

Indeed, “the molecule looks really good; it’s really well behaved; the structure kind of demonstrates that the molecule is stable in the correct confirmation that we were hoping for,” McLellan said. “So now we and others will use the molecule that we created as a basis for vaccine antigen.” Their colleagues at the NIH will now inject these spike proteins into animals to see how well the proteins trigger antibody production.

Still, McLellan thinks a vaccine is likely about 18 to 24 months away. That’s “still quite fast compared to normal vaccine development, which might take like 10 years,” he said.

The findings were published today (Feb. 19) in the journal Science.

Your TV remote could be 20 times dirtier than your toilet,...