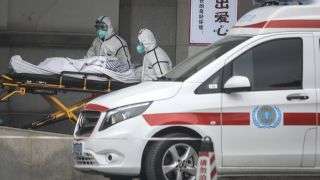 Medical staff transfer patients to Jin Yintan hospital on Jan. 17, 2020, in Wuhan, China, where an outbreak of a new coronavirus has sickened hundreds of people.

The case count and death toll from a new coronavirus in China continued to climb Wednesday (Jan. 22) as officials stepped up efforts to control the spread of the virus.

There are now 440 confirmed cases and 17 deaths linked to the virus in China, according to the BBC. That’s up from around 300 cases and six deaths reported just yesterday (Jan. 21).

Chinese officials also advised people not to travel into or out of Wuhan, the city where the outbreak originated, the BBC reported.

“Basically, do not go to Wuhan. And those in Wuhan, please do not leave the city,” Li Bin, China’s National Health Commission vice-minister, said in a news briefing, as reported by the BBC.

In addition to cases in China, the virus has been detected in travelers to Thailand, Japan, South Korea and Taiwan, and just yesterday (Jan. 21), the virus was diagnosed in the United States, in a man from Washington state who had recently returned from Wuhan, Live Science previously reported.

The U.S. Centers for Disease Control and Prevention (CDC) is now investigating the Washington case, which includes tracking people who had close contact with the patient to determine if anyone else will get sick.

The CDC also upgraded its travel advisory to Wuhan from level 1, “practice usual precautions,” to level 2, “practice enhanced precautions,” which says that travelers to Wuhan should try to avoid contact with sick people, animals and animal markets. In addition, the agency noted that older adults and people with underlying health conditions may be at greater risk for severe illness from this virus, and those people should discuss traveling to Wuhan with their health care provider.

Coronaviruses are a large family of viruses that cause respiratory illnesses, according to the CDC. This family includes the viruses that cause SARS and MERS (Middle East respiratory syndrome), as well as those that cause milder illnesses, like the common cold. Right now, the severity of this new virus, known as 2019-nCoV, is somewhat unclear. Although some patients have experienced severe illness, other patients — like the Washington case — have experienced a more mild illness.

While officials initially believed that the virus spread primarily from animals to people, there is growing evidence that the virus can spread from person to person in some cases. But just how easily it spreads is still unknown.

Today, the World Health Organization (WHO) is holding a meeting to determine whether the virus constitutes an international public health emergency, a distinction that was given during the swine flu outbreak of 2009 and the Ebola outbreak of 2014. That meeting is currently ongoing, according to the WHO.

The source of the outbreak is still unknown, although preliminary evidence from a genetic analysis of the virus suggests that it likely resided in snakes before jumping to humans, according to the authors of a new study published Wednesday (Jan. 22) in the Journal of Medical Virology.