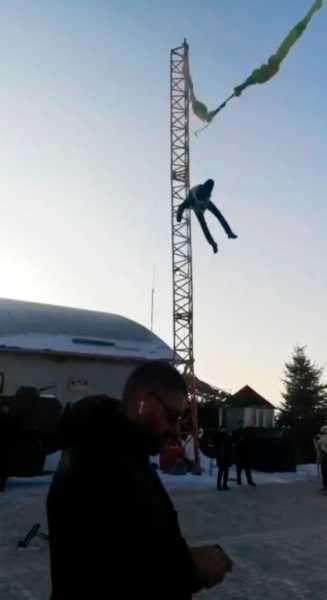 Police have launched a criminal investigation after the 13-year-old suffered multiple injuries when the slingshot ride went horribly wrong in Almaty, Kazakhstan

Dramatic footage shows the moment a teenage boy was catapulted 20ft in the air when a fairground attraction went badly wrong.

The 13-year-old remained conscious after his terrifying fall but sustained multiple fractures in the slingshot ride accident in Almaty, Kazakhstan.

Helpless onlookers screamed as the youth became detached from the ride and flew through the air before landing on the paving stones below.

According to reports, the elastic rope snapped at the point the teenager was supposed to be vertically catapulted at the city’s Kok-Tobe mountain recreation area.

But the video shows the elastic intact after the accident and it is suspected there was a problem with his harness or strapping for the daredevil ride.

The boy is catapulted 20ft in the air
(Image: @kris_p_almaty)

Health officials in Almaty said the boy was rushed to hospital and sustained four compression fractures of his lumbar vertebrae, along with a broken wrist, ankle and heel.

He is being cared for in the city’s Children's Emergency Centre, and faces weeks in hospital.

Head of the public health department Tleukhan Abildaev said: “The boy who fell from an attraction at Kok-Tobe has many fractures."

Police announced on Monday they have opened a criminal case into the incident. 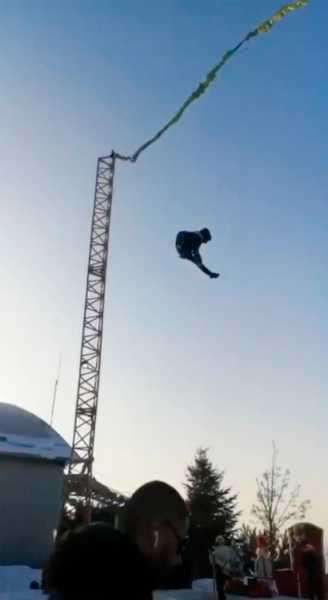 The teenager crashes to the ground
(Image: @kris_p_almaty)

A hospital spokesman added: “He was examined by doctors.

“He is receiving all necessary medical care in full.

“The boy's condition is stable."