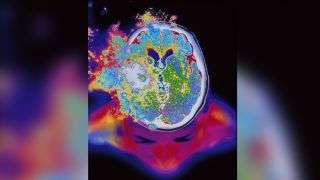 Salty fluid regularly flushes through the brain to clear away toxins and waste, but after a stroke, this liquid floods the organ, drowning its cells.

Swelling in the brain, known as cerebral edema, occurs after stroke as water flows into brain cells and the space surrounding them. For years, scientists thought this excess fluid came from blood, but new evidence suggests that the water springs from another source entirely: the sodium-rich cerebrospinal fluid that permeates the brain. These results come from both live mouse models and human tissue.

The findings, published Jan. 30 in the journal Science, point to potential treatments to subdue swelling in the brain and improve patients’ recovery after stroke.

Strokes occur when a blockage plugs a blood vessel in the brain, or a vessel completely ruptures. Without an adequate energy supply, brain cells can no longer police which particles pass through their membranes. Within minutes, the neurons swell like overfilled beach balls and begin to short-circuit, accrue damage and die. Hours later, the tightly woven tissue lining blood vessels in the brain, the blood-brain barrier, also begins to malfunction, and the entire organ takes on water.

“For over 60 years, people thought this accumulation of fluid was coming from the blood” leaking through the compromised blood-brain barrier, said study lead author Dr. Humberto Mestre, a clinician and current doctoral student at the University of Rochester Medical Center (URMC) Center for Translational Neuromedicine. But cerebral edema sets in long before the blood-brain barrier breaks down, leading Mestre and his colleagues to wonder whether the water actually comes from somewhere else.

“No one had looked at these alternate fluid sources,” Mestre said. Cerebrospinal fluid, which makes up about 10% of the fluid found in the mammalian cranial cavity, stood out as a promising candidate, he added.

In the brain, cerebrospinal fluid flows through the glymphatic system, a network of tubing that winds along paths carved out by the organ’s veins and arteries, according to a 2015 report in the journal Neurochemical Research. The fluid flows just outside the blood vessels, held in place by a “doughnut-shaped tunnel” of cells. (Picture a length of wire, representing an artery, resting inside a rubber hose, which acts like the outer tunnel filled with fluid.) As muscles along the arteries contract, the nearby cerebrospinal fluid gets pushed along its route and picks up metabolic wastes on the way. Besides taking out the trash, the glymphatic system may also help distribute fats, sugars and other important compounds within the brain.

Although crucial in a healthy brain, in the aftermath of a stroke, the glymphatic system goes haywire and drives the onset of edema, Mestre and his co-authors found. “The cerebrospinal fluid is actually the primary driver of swelling right after the stroke happens,” Mestre said.

The role of cerebrospinal fluid in stroke eluded scientists for decades, in part, because no technology existed to observe a stroke unfolding in real time, Mestre said.

He and his co-authors combined several techniques to observe the change in fluid flow in mice experiencing stroke. The team peered into the animals’ brains using both MRI and a two-photon microscope, which uses light and fluorescent chemicals to image living tissues. “We can basically image what the cerebrospinal fluid is doing while the stroke is happening,” Mestre said. By infusing the fluid with radioactive particles, the researchers could also determine how the flow rate changed over time.

Using these methods, the team determined that edema takes hold of the mouse brain “as early as 3 minutes” after stroke, long before the blood-brain barrier began to leak, Mestre said. As brain cells short-circuit, they spew chemical messengers known as neurotransmitters and potassium into the space beyond their membranes. Nearby cells react to the influx of chemicals and, in turn, short-circuit. As these electrical storms sweep through the brain, muscles within the blood vessels contract and create a pocket of space between themselves and the surrounding glymphatic system. Salty cerebrospinal fluid gets sucked into the resulting vacuum, pulling water molecules along with it.

“Wherever sodium is accumulating, water is going to follow it,” Mestre said. The team could watch this game of follow-the-leader unfold in select areas of the brain but could not track water flow in the whole organ at once. Using a computer model to simulate the entire glymphatic network, however, they were able to predict how constricting blood vessels would drive the flow of water through a whole mouse brain after stroke.

To connect the dots between mice and humans, the authors examined the brain tissue of patients who had died from ischemic stroke, wherein a blood clot blocks a blood vessel in the brain. The mouse and human brains accumulated fluid in the same regions, namely areas through which the glymphatic system runs and picks up wastes. Given the strong correlation between animals and people, “these findings could provide a conceptual basis for development of alternative treatment strategies,” the authors noted.

The team tested one of these strategies in mice by blocking a water channel on astrocytes, cells in the brain that help direct water through the glymphatic system. Mice that lacked the channel were slower to develop edema after stroke, suggesting that a similar treatment could show promise in human patients. In addition to blocking water flow, future treatments could potentially prevent edema by slowing the spread of stroke-induced electrical activity in the brain, the authors added. These electrical storms continue to barrage the brain for days after stroke, inciting edema each time they happen.

The harmful waves of electrical activity seen in ischemic stroke also appear in concert with “virtually every [central nervous system] injury,” Mestre said. The new study hints that the glymphatic system may play roles in conditions where there’s bleeding in and around the brain, traumatic brain injury and even migraine, although such connections remain “purely speculative.” Someday, the glymphatic system could offer doctors a whole new strategy for treating acute brain injuries, Mestre said.

End of the world: What the Bible said must happen before...