Research by director of intensive care at Zhongnan Hospital of Wuhan University, Dr Peng Zhiyong, shows up to 90 percent of the Chinese city’s first patients are still recovering

Many of the first coronavirus patients in Wuhan still have debilitating lung damage three months after being released from hospital, according to a new study.

While one in 10 no longer have the antibody needed to fight off the virus if it returns.

Research conducted by the director of intensive care at Zhongnan Hospital of Wuhan University, Dr Peng Zhiyong, raises worrying concerns about the long-term impact of the disease.

Those involved in the study reported a lack of energy, while around 50 percent were suffering with symptoms of depression, felt that they were stigmatised by society and could not return to a normal life, reports The Times.

For updates on coronavirus, follow our live blog HERE

A patient in Wuhan being checked by medics in February
(Image: AFP via Getty Images)

Dr Peng began his research in July and is tracking 107 patients with an average age of 59, who sustained viral pneumonia and were intubated during the early stages of the pandemic.

The director's work was conducted three months into a year long study and found 90 percent of patients still had lung damage, including to ventilation and gas exchange functions.

Ten percent, meanwhile, no longer have the Covid-19 antibody. 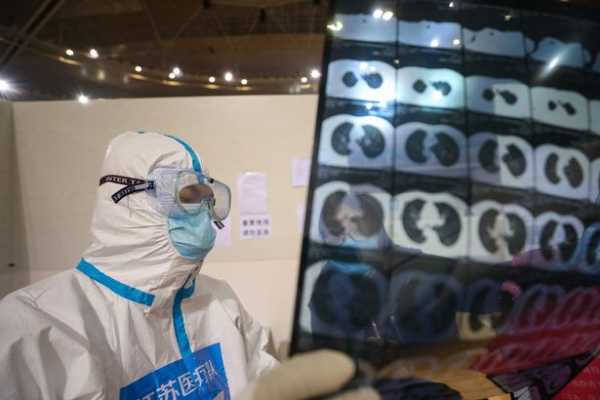 A doctor looking at a patient's CT scan at a temporary hospital in Wuhan in March
(Image: AFP via Getty Images)

However, it is not yet clear whether the presence of antibodies to the new  coronavirus, SARS-CoV-2, confers permanent immunity.

The veteran critical care doctor – who also treated patients during the deadly Sars outbreak in 2003 and bird flu in 2016 – has previously admitted to breaking down in tears during the current pandemic.

He said he couldn't hide his emotions at times when his department had to turn away critically ill patients because of a shortage of beds as well as when patients died.

"I couldn’t calm down in the face of death, but I just had to pull together to do my job," he told South China Morning Post in April.

Earlier this week, the director-general of the World Health Organisation (WHO) said there "might never be" a "silver bullet" treatment for the pandemic.

Dr Tedros Adhanom Ghebreyesus told a media briefing on Monday: "A number of vaccines are now in phase three clinical trials and we all hope to have a number of effective vaccines that can help prevent people from infection."

He added: "However, there's no silver bullet at the moment and there might never be."