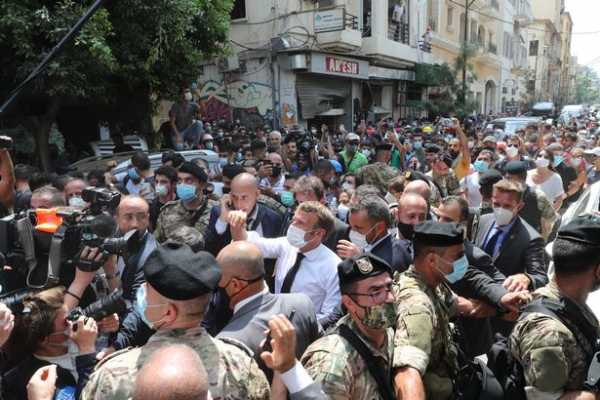 Protesters stormed the streets of Beirut and begged Emmanuel Macron to help them topple the "regime" they blame for Tuesday's devastating blast.

The visiting French President on Thursday promised aid to Lebanon as he toured the ruined streets.

But he reassured angry citizens reeling from a blast that killed 145 people that no blank cheques will be given to its leaders unless they enact reforms and end rife corruption.

Speaking at a news conference Macron called for an international inquiry into the devastating explosion that generated a seismic shock felt across the region.

He said it was an urgent signal to carry out anti-corruption reforms demanded by a furious population. 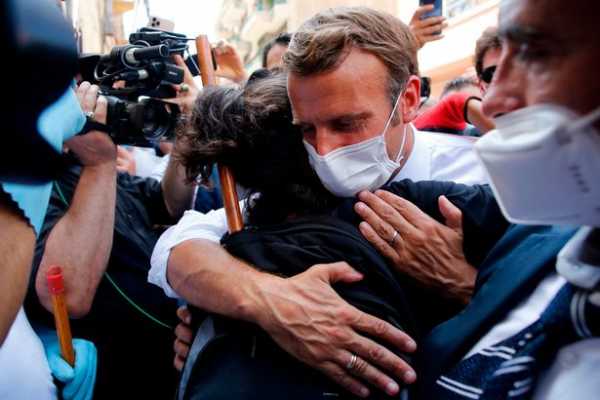 Macron hugs a resident in the shell-shocked city
(Image: POOL/AFP via Getty Images)

Dozens are still missing after Tuesday's explosion at the port that injured 5,000 people and left up to 250,000 without habitable homes.

It hammered a nation already staggering from economic meltdown and a surge in coronavirus cases.

Officials have said the death toll — given by a security source — was likely to rise. 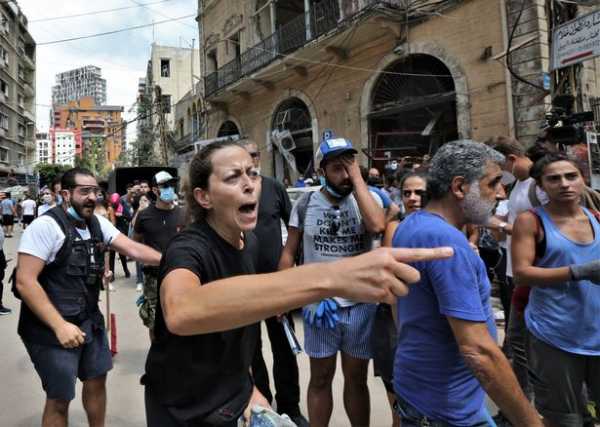 Macron said he proposed to the Lebanese authorities a roadmap of urgent reforms to unlock billions of dollars in funds from the international community, and that he would return to Lebanon in September to follow up.

"If reforms are not carried out, Lebanon will continue to sink," Macron said.

"What is also needed here is political change. This explosion should be the start of a new era."

He said France will organise an international aid conference for Lebanon, and he promised "transparent governance" so the aid goes to the people, NGOs and relief groups and not to the ruling elite which has been accused of corruption and mismanagement. 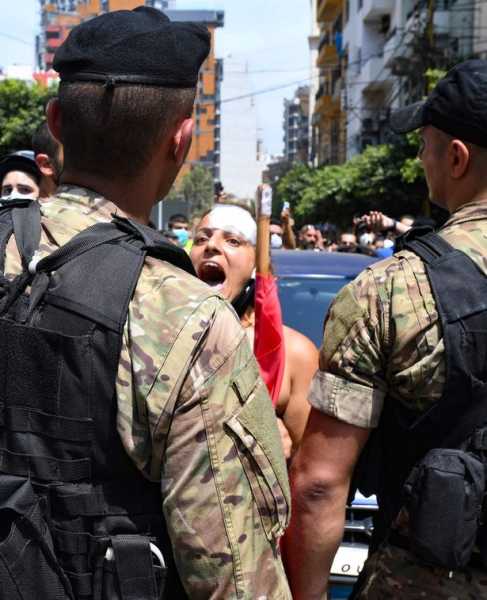 He told reporters that an audit was needed on the Lebanese central bank, among other urgent changes, and that the World Bank and United Nations would play a role in any Lebanese reforms.

Talks with the IMF on a rescue package have stalled over the failure of the government to enact serious reforms. 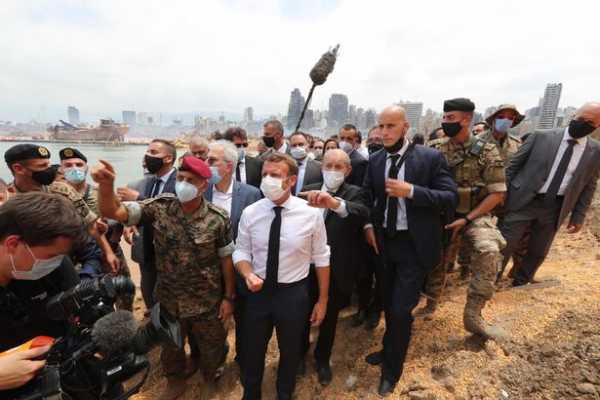 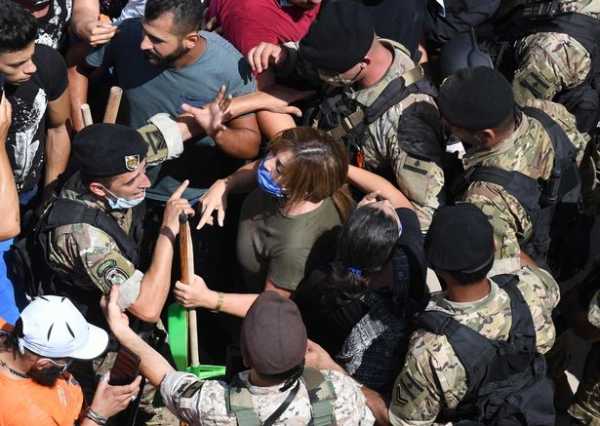 Protesters pleaded with the PM to help them topple their 'corrupt' leaders
(Image: AFP via Getty Images)

He urged Hezbollah to use its influence to press the government to carry out reforms and think of Lebanon's interest rather that Iran's.

Earlier, wearing a black tie in mourning, Macron toured the blast site and Beirut's shattered streets where angry crowds demanded an end to a "regime" of Lebanese politicians they blame for dragging Lebanon into disaster.

"I guarantee you, this [reconstruction] aid will not go to corrupt hands," Macron told the throngs who greeted him. 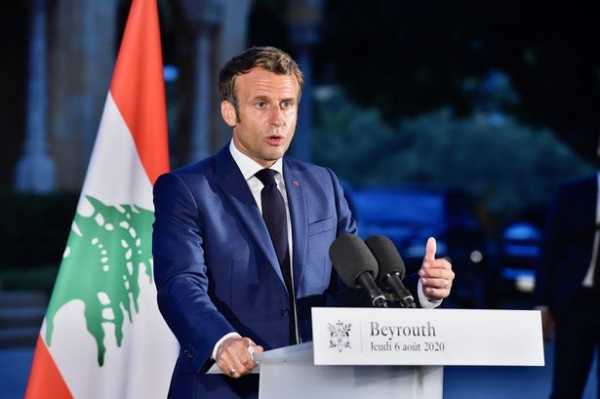 Macron speaks during a news conference at the official residence of the French Embassy building in Beirut
(Image: Anadolu Agency via Getty Images)

"I see the emotion on your face, the sadness, the pain. This is why I'm here," he told one group, pledging to deliver "home truths" to Lebanon's leaders.

At the French ambassador's residence, where a French general declared the creation of the state of Lebanon exactly 100 years ago, Macron said it was no longer up to France to tell Lebanese leaders what to do, but that he could apply "pressure".

In an interview with French news channel BFM, he said if France did not play its part, "that is of a power that believes in multilateralism and believes in the interests of the Lebanese people, other powers may interfere whether it be Iran, Saudi Arabia or Turkey." 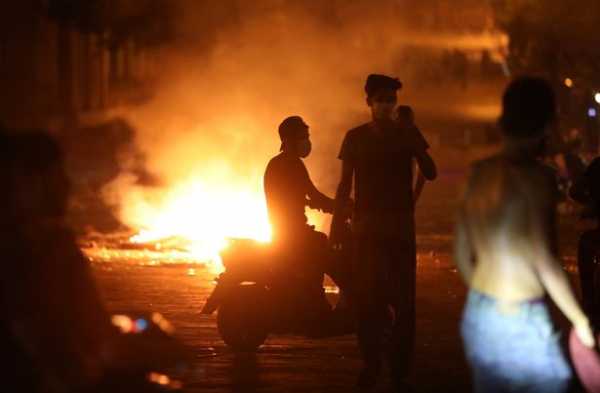 Demonstrators are pictured near burning fire during a protest near parliament
(Image: REUTERS) 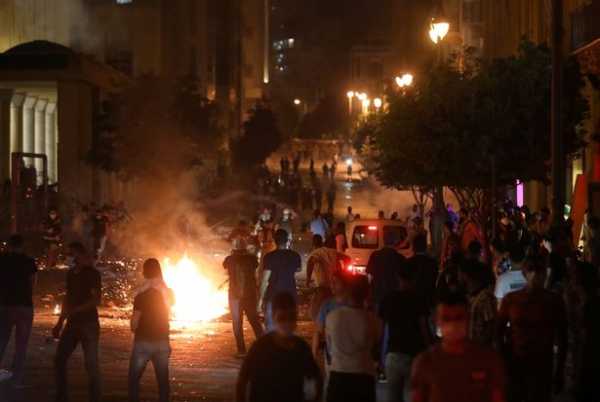 The government's failure to tackle a runaway budget, mounting debt and endemic corruption has prompted Western donors to demand reform.

Gulf Arab states who once helped have baulked at bailing out a nation they say is increasingly influenced by their rival Iran and Hezbollah.

At the port, destroyed by Tuesday's giant mushroom cloud and fireball, families sought news of the missing, amid mounting anger at the authorities for allowing huge quantities of highly explosive ammonium nitrate, used in making fertilisers and bombs, to be stored there for years in unsafe conditions.

There was a small but violent protest near an entrance to parliament in central Beirut, where riot police deployed after some demonstrators burned objects and hurled rocks at security forces, footage from local broadcasters showed.

The government has ordered some port officials be put under house arrest. State news agency NNA said 16 people were taken into custody.

A judicial source and local media said Beirut Port General Manager Hassan Koraytem was among them.

The central bank said it had decided to freeze the accounts of Koraytem and the head of Lebanese customs along with five others.