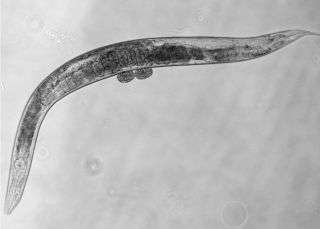 By tweaking a few key genes in the DNA of a roundworm, scientists have extended the animal’s life span by about 500%.

That’s a huge jump in life: An average roundworm lives for about three to four weeks. But when unencumbered of two specific genes — DAF-2 and RSKS-1 — the creatures can survive for several months.

Scientists had linked these genes to longevity years ago, noting an increase in the life span of worms and other creatures when these genes are switched off. However, the exact role of the genes in the aging process remained a mystery.

Now, researchers have connected the dots between these two genes and mitochondria, the tiny powerhouses that fuel cell function throughout the body. Mitochondria begin to malfunction as an organism ages, but silencing DAF-2 and RSKS-1 seems to delay this damage and extend life span — at least in roundworms, according to a study published in 2019 in the journal Cell Press.

Only time will tell if the anti-aging remedy could work in mammals, including humans.

Scientists first realized the link between DAF-2 and aging in the early 1990s, when a research team discovered that roundworms live twice as long as normal when they carry a mutated version of the gene. The finding jump-started a new era in the study of aging, one driven by genes and their byproducts.

“It was like a game-changer in the field … because people started believing that a single gene can extend life span,” co-author Pankaj Kapahi, a professor at the Buck Institute for Research on Aging in Novato, California, told Live Science.

Over time, research groups uncovered more longevity genes, including RSKS-1, but mounting evidence suggested these special segments of genetic code don’t work in isolation. Instead, they coordinate with a team of other genes and the proteins that they help to build, triggering cascades of cellular activity known as “signaling pathways.” Think of signaling pathways as rows of dominos — when one domino topples, it falls into another and sets off an intricate chain reaction.

To uncover where this anti-aging effect comes from, Kapahi and his colleagues spied on the cells of mutant roundworms, in which both of those genes had been turned off. Using a technique called “polysomal profiling,” the team could track which proteins the cells were building at any given moment. During protein construction, cells can employ various mechanisms to ramp up production of a particular protein or dial it back. The team found that, in mutant worms, cells built far fewer copies of a protein called “cytochrome c” than normal worms.

Here’s where mitochondria come into the picture:

Cytochrome c appears in the inner membrane of mitochondria and helps pass negatively charged electrons through its structure. This transfer of electrons from protein to protein allows mitochondria to generate fuel — but in mutant worms, a gap appears where cytochrome c should be. Unable to make fuel as efficiently as they would normally, the mitochondria dial back energy production and instead focus on repairing damaged tissues.

“Proteins get damaged with age, and you see less damage with these pathways inhibited,” Kapahi said. In addition, research suggests that certain tissues, such as those in the muscles and brain, may even grow healthier as long as these pathways remain stifled, he added.

From worms to humans

Overall, the mutant worms dialed back both protein and energy production in favor of repairing their aging cells. Specifically, a lack of cytochrome c in the animals’ reproductive cells seemed key to this process, the authors noted. It may be that the worms put processes related to reproduction on hold while in low-energy mode, they said.

Organisms react similarly when pushed into starvation mode — without adequate nutrition, cellular signals tell the body to take a “time out” from preparing to produce offspring, Kapahi said. This idea is also supported by the 1990s study of old roundworms; In that study, the mutant worms lived twice as long as normal worms, but they also produced about 20% fewer offspring.

Far from being a passive process, aging in the roundworm seems to involve a messy tangle of biological pathways that work together to regulate metabolism, protein construction and potentially reproduction. Although similar pathways exist in humans, scientists still don’t know if aging works the same way in both organisms, Kapahi said. If anything, aging in humans may prove more complex.

“Conservation isn’t absolute and important differences in these pathways between worms and mammals exist,” Dr. Joseph Avruch, a professor of medicine at Harvard Medical School and chief of the diabetes unit at Massachusetts General Hospital, told Live Science in an email.

While tamping down signaling in the insulin and TOR pathways seems to extend the life span of worms, it’s unclear whether humans would have the same response.

“If the gene network identified here … functions similarly in mammals, then pharmacologic interventions become feasible,” Avruch said. In other words, the anti-aging experiments first conducted in worms must be replicated in mammals before anyone will know if they could possibly work in humans.

The pathways involved in the aging process “might be something very specific to the worm,” Kapahi said. “But we’ll never know if we don’t ask these questions.”