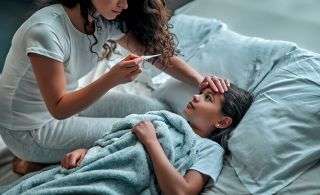 Children are no less likely than adults to become infected with the new coronavirus, but they are less likely to get seriously ill from it.

Those are the results of a new study from China’s Shenzhen province uploaded on the preprint site MedRxiv on March 4. The research team, led by scientists from the Johns Hopkins Bloomberg School of Public Health and the Shenzhen Center for Disease Control and Prevention, followed 391 people who contracted the new coronavirus, SARS-CoV-2, between Jan. 12 and Feb. 14, as well as 1,286 of their close contacts. This surveillance of close contacts allowed the researchers to understand how the disease spread through friends, colleagues and family members.

The study is not yet peer-reviewed, but it did reproduce a pattern that researchers have been observing since early in the outbreak: Children don’t seem to get sick with COVID-19, the disease caused by the virus, at the same rate adults do. This is likely because children have healthier lungs than adults do (they don’t smoke and have fewer years of exposure to pollution) and because adults are more likely to have dangerous immune responses to respiratory diseases, experts told Live Science last month.

However, the new research shows that children do, in fact, catch the coronavirus at about the same rate as adults. According to the findings, 7.4% of children exposed to one of the known carriers of the disease in the study later tested positive for the disease, similar to the population average of 7.9%.

Within households, the disease spread most readily, with 15% of people living with an infected person later coming down with the virus.

What remains unclear is how readily children, with their relatively mild symptoms, spread the disease to other people — especially to vulnerable older individuals.

“That’s one of the current critical remaining questions, and we’re trying to figure out how to answer” it, study co-author Justin Lessler, an infectious-disease epidemiologist at the Johns Hopkins Bloomberg School of Public Health, told Nature News. “I have a 7-month-old and a 6-year-old, and I can’t imagine that, if they have any virus at all, they’re not getting it on somebody.”

If children are effective at transmitting the virus, it would bolster the case for school closures aimed at reducing the scope of the outbreak. School closure is a difficult decision, epidemiologists previously told Live Science, because it is a highly disruptive step. And we don’t know the best time to close schools or how long they need to stay closed to reduce the spread of the disease.

A second lesson described in the new research is that close surveillance can help to stop the new coronavirus from spreading. People who were tested proactively because of their contact with an infected person were isolated 2.7 days after developing symptoms, the researchers found. In comparison, people who were tested only after developing symptoms were isolated 4.6 days after the symptoms emerged, an additional 1.9 days of potentially transmitting the virus.