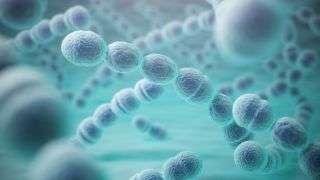 Scientists may have uncovered a new weapon in the fight against antibiotic-resistant superbugs: drugs that freeze bacterial evolution in its tracks.

Antibiotic-resistant bacteria are those microbes that somehow survive even under the onslaught from megadrugs meant to kill them. Every year, at least 2.8 million people in the U.S. catch one of these superstrong bacteria or resistant fungi, according to the Centers for Disease Control and Prevention (CDC).

One of the ways that bacteria evolve to become “antibiotic resistant” is by picking up free-floating genetic material from their environments. They then incorporate the scavenged genes into their own DNA. In this way, bacteria can collect genes shed from microbes that are already resistant, and thus, gain resistance themselves. But bacteria aren’t able to catch wayward bits of DNA without the right equipment; the “bugs” must first enter a state called “competence” to build the machinery required to scoop genetic material from their surroundings.

Bacteria become competent when placed under stress, such as when they’re subjected to antibiotic treatments. Studies suggest that several common classes of antibiotics actually drive the spread of antibiotic resistance by pushing bacteria into a stressed-out state. But now, a new study of the bacteria Streptococcus pneumoniae has highlighted a potential solution to this paradoxical problem: drugs that prevent bacteria from becoming competent in the first place.

For the study, published Tuesday (March 3) in the journal Cell Host & Microbe, researchers put this strategy to the test in a mouse model and successfully blocked several strains of S. pneumoniae from becoming competent and exchanging genes inside the mice. The bacteria, which typically live in the human nose and throat, can trigger serious infections if they migrate into the bloodstream, sinuses, ears, lungs, or tissues covering the brain or spinal cord, according to the CDC.

Antibiotics stand as the only available treatment for these infections, but in more than 30% of cases, the S. pneumoniae strains prove resistant to one or more antibiotics. If so-called “anti-evolution” drugs prove safe in humans, perhaps the medications could help prevent more strains from acquiring resistance, the researchers suggested.

The researchers screened more than 1,300 medications to pinpoint which ones could bring competence to a grinding halt. Results pointed to 46 such drugs, including antipsychotic medications, anti-microbials and an anti-malarial drug. Although diverse, the drugs all prevent competence at low doses via the same mechanism, the researchers found.

“The competence pathway has been studied for decades, and we know all the key components,” study authors Jan-Willem Veening, a professor in the Department of Fundamental Microbiology at the Swiss University of Lausanne, and Arnau Domenech, a postdoctoral researcher in Veening’s lab, told Live Science in an email.

One key component, known as the proton-motive force (PMF), allows the cell to produce energy, import nutrients, and shuttle cargo in and out of its body. When bacteria go into that competent state, they usually pump out a peptide called CSP, which accumulates outside the cell and triggers competence (the ability to grab antibiotic-resistant gene scraps) once it has built up beyond a certain threshold.

But when subjected to anti-evolution drugs, S. pneumoniae can no longer maintain a normal PMF, and the transporter that usually pumps out CSP malfunctions. “As the competence pathway is tightly regulated, if CSP is not exported, the expression of the key compounds is blocked and competence is inhibited,” Domenech and Veening said.

The authors tested the effect of select drugs — an anti-microbial, antipsychotic and anti-malarial — on cultured S. pneumoniae and found that they all blocked competence by disrupting that PMF component. They found the same results in both the live mice and in human cells in lab dishes.

“The beauty of the present work is that we found several compounds … that can slightly disturb the PMF without affecting the normal growth of the cell,” Domenech and Veening added.

“It’s disrupting the growth of the bacteria that drives the selection for resistance,” said Andrew Read, a professor of disease ecology and biology at Pennsylvania State University who was not involved in the study. If drugs can block competence without driving the cells to develop resistance, “then the bugs would stay sensitive” to antibiotic treatment, he said.

Future studies will be needed to determine whether “‘anti-evolution’ drugs can be realistically used in combination with antibiotics to prevent the spread of antibiotic resistance,” the authors noted in their paper. “Our next steps will be to test whether [these drugs] are specific for Streptococcus pneumoniae or if they can also block acquisition of resistance in other human pathogens,” Domenech and Veening told Live Science. Read said that the philosophy of derailing evolution to prevent resistance should carry over to other bugs, but the exact drug targets might differ between them.

In developing the drugs for human use, scientists will have to be clever in how they design clinical trials, Read added. “It’s a ‘protect the therapeutic’ drug, rather than a therapeutic itself,” meaning the goal of the drugs wouldn’t be to treat people, per say, but instead prevent resistance, he said.

“Instead of aiming to kill bugs,” as many groups aim to accomplish with new antibiotic medications, “this is trying to stop the input of genetic variation on which selection can act.” Read said. “For me, [these are] great first steps — let’s go.”