Home History Titanic’s iconic telegraph ‘voice’ may be recovered. But some say the salvager... 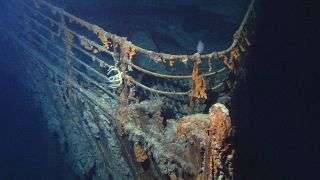 The remains of the RMS Titanic are rapidly corroding at the bottom of the North Atlantic. But a proposal to cut the ship’s telegraph machine from the wreck has drawn fierce criticism.

A wireless telegraph machine, sometimes called the “voice of the Titanic” for its role in sending out distress messages on the fateful night in 1912 when the RMS Titanic cruise liner hit an iceberg, could be recovered from the shipwreck lying at the bottom of the North Atlantic.

But not everyone is on board with this plan: One of the scientists behind the recovery plan says he is shocked by the “outpouring of contempt” that the proposal has generated among critics.

Oceanographer David Gallo, formerly of the Woods Hole Oceanographic Institution (WHOI) in Massachusetts and now a consultant for the court-approved salvager of the shipwreck, RMS Titanic Inc., said the proposal was an attempt to save the iconic artifact before it was lost forever.

The company had expected some opposition to their recovery plan, but it was not prepared by the sometimes “outrageous” and misinformed negative reaction, he said.

“I’ve been called a greedy treasure hunter, a grave robber,” Gallo told Live Science. “I find these charges to be personally insulting.”

The Marconi wireless telegraph machine sent out frantic distress calls on the night of April 14 and 15, 1912, after the ship hit an iceberg in the North Atlantic and started to sink. Only about 700 of the more than 2,300 people on board survived.

Underwater video taken last year showed the “Marconi Room” on the Titanic’s boat deck is badly corroded by rust and collapsing, and that the machine could soon be unrecoverable, Gallo said.

The company has proposed that an expedition to the wreck later this year could use underwater robots to cut the telegraph machine free. But their bid to get approval from a U.S. federal court has been opposed by the governments of the United States and United Kingdom, which assert the Titanic shipwreck is now protected by an agreement between the two countries, CNN reported.

RMS Titanic Inc. was established in a U.S. federal court in 1994 as the official salvager of the Titanic wreck and the steward of artifacts recovered from it. But the court ordered in 2000 that nothing should be cut or detached from the wreck.

The company has now asked the court to modify that order to allow the recovery of the telegraph machine, and U.S. District Judge Rebecca Beach Smith has asked for time to consider the proposal; she’s expected to give her decision in the next few weeks.

Lawyers for the National Oceanic and Atmospheric Administration, a U.S. government agency, told the court that the proposal was a “placeholder” for future requests to cut other artifacts from the Titanic shipwreck, according to the Associated Press.

They also presented a letter from the Joint Nautical Archaeology Policy Committee, a non-governmental body that represents several U.K. maritime archaeology groups, alleging that the case for recovering the telegraph machine is “exaggerated,” the Telegraph reported.

Gallo counters that the company is motivated by its responsibility to the legacy of the Titanic and not by financial gain.

Using underwater robots to cut the telegraph machine free and recover it would cost between $5 million and $7 million, which is many times what the company could hope to recover from entry fees to its exhibitions of Titanic artifacts, he said.

Scientists have noted that the shipwreck — which has now been under more than 2 miles (3 kilometers) of seawater for more than 100 years — is deteriorating rapidly from rust and the activity of deep-sea microorganisms.

Some think it could disappear completely in a few years, Live Science has reported.

In 1985, a French and American expedition co-led by WHOI oceanographer Robert Ballard discovered the Titanic wreck. Gallo joined WHOI a few years later and initially spoke out against the salvage of artifacts by RMS Titanic Inc., arguing that they should be left on the shipwreck.

But he changed his mind after visiting one of the company’s exhibitions of Titanic artifacts: “I was amazed at what I witnessed. Whole families visited the exhibits … I realized the powerful way artifacts can ignite the imagination.”

Gallo started working as a consultant for RMS Titanic in 2009, after the original company declared bankruptcy and their assets were bought by new investors who were committed to preserving the Titanic’s legacy, he said.

“We have two choices,” he said. “Leave the telegraph machine to the ocean and perhaps lose the ‘voice of Titanic’ forever, or recover and conserve the telegraph so that it lives on forever.”

Concerns that the shipwreck should be left as a “mass grave” were perhaps misinformed about the realities of the shipwreck, he said.

Most of the more than 1,500 people who died in the Titanic’s sinking froze to death in the water on the surface, and no one has ever seen any human remains inside the ship, he said.

All the same, expedition members treated the wreck with respect, as if it was a grave — but that should not preclude efforts to save some of its artifacts from destruction, he said.