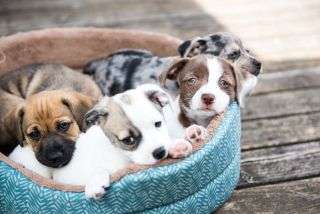 Sure, that puppy in the window is cute, but the little furball might make you sick — puppies sold in pet stores have been linked with a new outbreak of a multidrug-resistant bacterial infection, according to health officials.

This week, the Centers for Disease Control and Prevention (CDC) announced that it is investigating an outbreak of Campylobacter — a type of bacteria that causes diarrhea — that is linked with pet store puppies.

So far, the outbreak has sickened 30 people in 13 states. These individuals fell ill between January and November 2019, and four people were hospitalized.

An infection with Campylobacter is one of the most common causes of diarrheal illness in the U.S., according to the CDC. Most U.S. infections with the bacteria are tied to eating contaminated food, but the disease can also spread through contact with feces from dogs or cats.

Symptoms of Campylobacter infection usually begin within two to five days of exposure to the bacteria and include diarrhea, fever, stomach cramps, nausea and vomiting.

The particular strain of Campylobacter causing this outbreak appears to be resistant to some commonly used antibiotics, the CDC said.

A similar outbreak of Campylobacter infections tied to pet store puppies occurred in 2016 through 2018, which ultimately sickened more than 100 people in 17 states. The strain causing the current outbreak is closely related to the 2016-2018 outbreak strain, the CDC said.

To reduce the risk of Campylobacter infection, the CDC recommends people thoroughly wash their hands with soap and water after touching puppies or dogs, and after handling their food or cleaning up after them. People who get a new puppy or dog should also take it to a veterinarian within a few days for a health checkup, the CDC says.