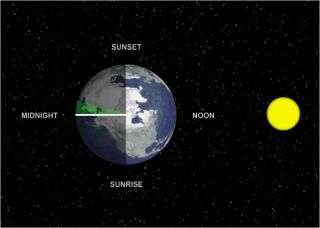 An illustration of the International Date Line.

The IDL is not a matter of international law, but it’s one of the few standards embraced globally. The IDL is crucial for global interconnectivity, instantaneous communication, time measurement and consistent international databases. It’s mostly about convenience, commerce, and politics. The IDL happened for much the same reasons as the emergence of the Internet — it works, and it makes life a little bit easier. Before discussing how and why the International Date Line came to be, we should first review the matter of keeping time.

‘Does anybody really know what time it is?’

Back in the days before mechanical clocks, time was measured mostly using sundials. People relied on the definition that “noon” was when the sun was highest in the sky, and due south. One “day” was simply the amount of time between two consecutive “noons.” Most cities on the planet set their clocks to that cycle, and all was good — at least within any specific city.

The problem was, each city experienced noon at its own (apparent) 12:00 p.m. Depending on longitude, adjacent cities could have a time of, say, 11:45 a.m. or 12:15 p.m. displayed on their sundials. Near the equator, traveling westward by about 1,000 miles (1,600 kilometers) delays the arrival of noon by one hour.

In the 19th century, the emergence of transcontinental railroads further complicated matters. That century also saw accurate mechanical timepieces becoming widely available. Travelers found themselves resetting their watches by several minutes at every station to the east or west. This was inconvenient at best.

Also in that century, the emergence of telegraphy created time-keeping issues for commercial and military entities — the early adopters. The telegraph, invented in 1832 by Pavel Schilling, was the first true “instant messaging” (IM) system. It allowed communication over great distances using electricity, which moves (nearly) at the speed of light.

The telephone, patented in 1876 by Alexander Graham Bell, was the second such IM system. And of course, to use either system effectively, it’s helpful to know the clock times at both the sender’s and receiver’s locations.

Before we explain how time zones solved these clock problems, let’s do a quick review of latitude and longitude. Around 150 B.C., Hipparchus of Nicea, a Greek mathematician and astronomer, proposed a global grid of longitude and latitude lines to measure position. It was a coordinate system for locating points on the surface of a sphere. The vertical axis measured “latitude,” and the horizontal axis “longitude.” Though prescient, his idea languished for over a millennium.

During the Age of Discovery, beginning in the 15th century, cartographers saw the need for standardized latitude and longitude measurement. If your intent is to map or claim a geographic location, you need to describe its position unambiguously. Britain “ruled the waves” at the time, and took the early lead in this endeavor.

Portugal and Spain, the other major seafaring nations, were using their own systems, but eventually deferred to England. Latitude was less an issue than longitude, since there was no dispute about where the poles (latitude 90 degrees north and 90 degrees south) and equator (latitude 0 degrees) were located. However, the selection of a starting point for longitude measurement (the 0-degree meridian) was arbitrary. It was based more on national pride and convenience.

In 1851, England designated the Prime Meridian (0 degrees longitude) as the meridian running through Greenwich Observatory. They were the dominant seafaring nation in that era, had colonies around the globe, were using state-of-the-art mechanical clocks, and were scientifically qualified to establish a standard. You’ve heard the saying “The sun never sets on the British Empire.” That was once true. England had colonies all around the globe, so it was always “daytime” somewhere in the British Empire. Britain had clout.

By the latter part of the 19th century, scientists, railroads and other emerging industries felt the need for a global standard of time. The first such system, using 24 standard time zones, was proposed by Sir Sandford Fleming in 1876. Sandford was a Scottish engineer, who helped design the Canadian railway network. His system wasn’t officially sanctioned by any global entity, but by 1900 it spawned the adoption of the time zone system in use today. Nation by nation, the world bought into Fleming’s idea.

Within each time zone, all clocks would be set to an average time that best represented where the sun was located in the sky. That time is called mean solar time. Sundials, by comparison, measure apparent solar time, sometimes called true solar time.

The time-zone process began in 1883 for the United States, when the nation was divided into four standard time zones. Each zone was centered on a meridian of longitude: Watch the IDL work

In the video above, study that first paused frame before you hit “play.” It shows the IDL (white line) at the midnight point. For the sake of labels, let’s say the green wedge represents the first hour of Saturday. The blue part of the Earth is still on Friday. The red part (which will appear later) will be Sunday.

That green wedge is the first time zone west of the IDL. West is clockwise as seen in this view from above the North Pole. Of note, this green time zone: 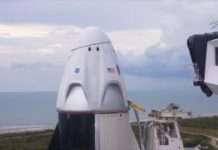 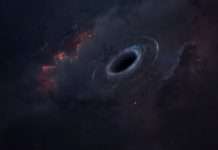