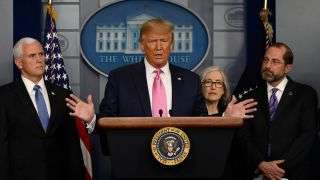 “I’m going to be putting our Vice President in charge,” of the response, Trump said in a news briefing.

Earlier in the week, lawmakers had called for the appointment of a “coronavirus czar” who would be in charge of the country’s response, as was done in 2014 during the Ebola outbreak.

“I look forward, Mr. President, to serving in this role…of bringing together all the members of the coronavirus task force you’ve established,” Pence said during the briefing.

Pence said the task force will be working with local governments and state health officials to make sure they have the resources to respond to the illness called COVID-19.

—See live updates on the new coronavirus
—How deadly is COVID-19?
—Why are children ‘missing’ from coronavirus outbreak?
—Will a face mask protect you?

The Trump Administration has requested $2.5 billion to fund its coronavirus response, half of which would come from money previously allocated to other federal programs, such as funding for Ebola prevention, according to The New York Times.

However, lawmakers have said this amount is far from what’s needed to combat the virus in the U.S. On Wednesday, Sen. Chuck Schumer (D-NY) said the funding should be increased to $8.5 billion. He noted that in 2009, Congress appropriated $7 billion for the response to H1N1 “swine flu,” the Times reported.

During the briefing, Trump suggested the administration may request a higher amount. “We’re going to spend whatever’s appropriate,” Trump said. “Hopefully, we won’t have to spend so much.”

There are now 15 cases of coronavirus in the U.S., which were detected through public health surveillance, and 45 cases among Americans who were “repatriated” to the U.S. from Wuhan or the Diamond Princess cruise ship. Of these 15 cases, eight have fully recovered and returned to their homes, Trump said.

Officials emphasized during the briefing that America’s strategy to contain the virus is working. “The immediate risk to the American public has been and continues to be low,” said Alex Azar, U.S. Secretary of Health and Human Services. However, Azar added “the degree of risk has the potential to change quickly. … We can expect to see more cases in the United States.”

The U.S. is also working rapidly to develop a vaccine against coronavirus, but even so, it will likely take a year to a year and a half before a vaccine is ready, said Dr. Anthony Fauci, director of the National Institute of Allergy and Infectious Diseases.

“This is the fastest we have ever gone from the sequence of a virus to a trial,” Fauci added.”We can’t rely on a vaccine over the next several months to a year.”

Still, Fauci noted that a trial for an antiviral drug against coronavirus began this week, and officials expect results from that more quickly. “We will know reasonably soon whether it works,” he said.