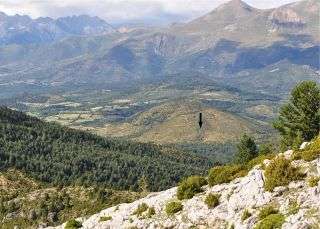 The cave of Els Trocs in the Spanish Pyrenees, indicated here by an arrow, was the scene of a brutal massacre about 7,300 years ago.

The bones of nine Neolithic people found in a cave in northern Spain suggest they were killed and then beaten after death, in a massacre that may have been caused by their migration into the region more than 7,000 years ago. Archaeologists say the vicious attack has the hallmarks of a “xenophobic” clash between enemy groups.

The team found theskeletons inside the cave at Els Trocs, on a mountain slope in the Bisaurri region of the Spanish Pyrenees range of mountains. Clusters of human remains show the cave was inhabited by different groups of people at least three times during the Neolithic period in southwest Europe.

Now, archaeologists have examined the cave’s oldest remains, which date from about 5,300 B.C., and they’ve found that the individuals were brutally slaughtered and then mutilated.

Arrow wounds were found on the skulls of the five adults in the group, but not anywhere else on their skeletons, suggesting they’d all been deliberately shot in the head at close range. The bones also showed that all of the bodies — including those of four young children, between the ages of 3 and 7 — had been violently smashed with stones or clubs after their deaths.

“All the adults show fatal injuries from bows and arrows,” said archaeologist Kurt Alt from the Danube Private University at Krems an der Donau in Austria. “The adults and children also exhibit blunt force trauma, for instance to the head, or to the arms and legs.”

The research was published online Feb. 7 in the Open Access journal Scientific Reports.

The researchers think the massacre at Els Trocs cave may have been the result of escalating disputes over land, cattle or even women.

“There could have been many conceivable motives for the attack, with territorial causes perhaps the most likely one,” Alt told Live Science in an email.

Tests show the victims were among the first waves of settlers who had slowly made their way into the region from the Near East over thousands of years, perhaps bringing new farming techniques with them.

“The people show DNA profiles typical of Neolithic immigrants, which at this stage can be very well distinguished from the DNA of the indigenous hunter-gatherers,” Alt said.

The genetic tests also showed that one of the adult victims, about 30 years old, was the father of one of the child victims, a 6-year-old boy.

The evidence from the remains found in Els Trocs cave seems to suggest violence between people of “conceivably different origins and world views,” the researchers wrote.

“‘The conflict conveys the impression of a xenophobic action; the type of aggression suggests a clash between enemy groups,” they wrote.

Rock paintings from the Les Dogues rock shelter, about 140 miles (230 kilometers) south of Els Trocs, show that Neolithic people “were really attacking each other with such weapons,” rather than following the nonviolent, “egalitarian ethic” that was once theorized to predominate in Neolithic times.

The relatively remote location of Els Trocs cave may also have contributed to the violence: “The geographic situation could be the reason why the groups involved may not have known each other previously, and therefore clashed so violently,” he said.

But what appears to be a case of ancient ethnic violence could have lessons in the modern world, because it shows that humans have developed mechanisms for dealing nonviolently with disputes.

“In most parts of the world, people live together peacefully. We also have certain mechanisms of control, for example through organizations like the United Nations,” Alt said. “And there are plenty of examples that where the authorities earnestly work for a peaceful solution, such problems may be solved.”

“But on the other hand, we also have two faces — sometimes we behave like chimpanzees [which sometimes kill other chimpanzees], but most of the time we act as peaceful as bonobos,” he said.