Home History Found 400 years ago, mummies had a CT scan. 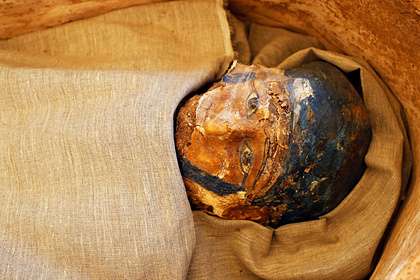 The mummies, found in 1615, first performed computed tomography. It turned out that the remains belong to a man of 20 years old, a woman of 30 years old and a teenage girl from 17 to 19 years old. About this writes PLOS ONE.

It is noted that the bodies were buried along with jewelry, coins and jewelry. According to researchers, people who owned mummies had diseases that presumably caused them to die at a young age. Scientists decided to make a tomogram so as not to damage the remains during the autopsy.

at least one of mummies was buried with all internal organs

Their value is that these three mummies are the only surviving “portrait mummies” from Saqqara, an ancient Egyptian necropolis. The bodies were put on boards, covered with savan, and then poured with gypsum and gold. The resulting sarcophagus was painted, depicting on it a portrait of the deceased.

According to the study, at least one mummy was buried with all internal organs. Together with the woman, her jewelry was buried, testifying to her belonging to the higher class.

Earlier it was reported that scientists were able to recreate the face of an ancient Egyptian boy according to his portrait attached to the cover of the sarcophagus. It is noted that the child died at the age of three to four years, but in the image he was older.

The scientist told when the space debris will disappear. EXCLUSIVE