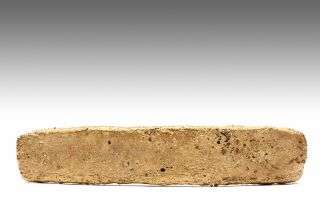 Nearly four decades ago, a construction worker discovered a gigantic bar of gold while excavating ahead of construction of a new building in Mexico City. Now, archaeologists have confirmed that this slab of gold was plundered from the Aztecs by Spanish conquistadors in the 16th century.

In the middle of the night on June 30, 1520, faced with an Aztec rebellion and a lack of food, Hernán Cortés and his followers stole a huge cache of Aztec treasures and fled from Tenochtitlán (modern-day Mexico City), which they had recently conquered.

On that night, known to the Spanish as “La Noche Triste” or the “Night of Sadness,” many of the Spanish soldiers drowned when their vessel sank in a now dried-up canal that fed into Lake Texcoco. And with them sank many of the Aztec treasures they were carrying a — including the huge gold bar.

In 1981, a construction worker discovered the gold bar, weighing 4,255 lbs. (1,930 kilograms) while digging for the construction of a central bank in Mexico City. Though the gold bar was found on the route that Cortés is thought to have taken, no one knew if it was truly plundered Aztec treasure.

To answer that question, a group of researchers at Mexico’s National Institute of Anthropology and History (INAH) and the National Autonomous University of Mexico (UNAM) recently analyzed the gold bar using X-rays. They found that the composition of the gold — around 76% gold, 21% silver and 3% copper — matched the composition of other pieces of gold recovered by the Templo Mayor Project, an INAH excavation of the main temple used in Tenochtitlán. That suggests the gold likely belonged to the Aztecs. The gold found at the Aztec’s Templo Mayor has less copper than the gold belonging to the Maya or the Mixtec, according to a statement from the INAH.

The gold bar matches pieces found around the monolith of the goddess Tlatecuhtli at the temple, which means the gold bar was likely cast at a similar time, sometime between 1519 and 1520, according to the statement.

The bar is “a dramatic material witness of the Spanish Conquest and unique archaeological testimony of the so-called ‘Sad Night,'” Leonardo López Luján, the director of the Templo Mayor Project, said in the statement. It is now on display at the National Museum of Anthropology in Mexico City.