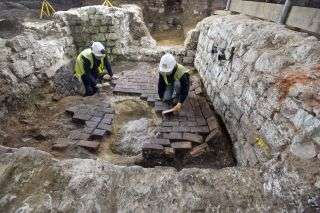 Archaeologists have discovered a 14th-century cesspit that underwent an extreme makeover over the centuries, transforming from a receptacle for human excrement into a fashionable cellar with a latrine.

Since discovering the cesspool in London at the end of 2019, archaeologists at the Museum of London Archaeology (MOLA) have examined the structure and found a number of priceless artifacts within it, including a gold-plated ring, an iron spur for riding horses and a fork from the post-medieval period.

The team even uncovered a rare medieval tile depicting “a strange mythical creature with a human head at one end and a leaf-like tail at the other,” Antonietta Lerz, a senior archaeologist at MOLA, told Live Science in an email.

The MOLA team members found the chalk-lined cesspit while they were excavating the basement at The Courtauld Institute of Art ahead of a construction project.

The pit itself is quite large: a square of about 15 feet by 15 feet (4.5 meters) that’s constructed with chalk walls about 3 feet (1 m) wide. It’s more than 13 feet (4 m) deep, although it may have been even deeper before its renovation into a cellar, Lerz said.

When it was first built, the cesspit would have had seats over it. These seats were likely used by residents and visitors of Chester Inn, where the Bishop of Chester stayed while in London.

A preliminary examination indicates that the structure was used for human waste for about a century, although “cesspits were routinely cleaned out, so the period of use may have been longer than the recovered finds suggest,” Lerz said. “We hope to be able to refine our interpretation once all of the material is properly assessed.”

By the 17th century, the cesspit had been converted into a cellar. In the following decades, workers added several layers of brick flooring, with the last layer dating to the 18th century, Lerz said. Finally, in the 19th century, a small latrine was added in the northwest corner of the cesspit.

No cesspit or cellar would be complete without a few odds and ends that had been thrown away or left there over the years. For instance, archaeologists also found a glazed bowl and a glass inkwell. The gold-plated ring dates to the 14th century and may contain a garnet. The two-pronged fork, which has a bone handle, was likely used to dine on sweetmeats, or sugar-filled delicacies, Lerz added.

The most curious find, however, is the floor tile of the mythical beast, which dates to about 1350 to 1390. It was part of a four-tile panel made at a tilery (a tile-production shop) in Penn, a village in the district of Buckinghamshire.

“‘Penn’ tiles were often used in palaces and monastic sites during the medieval period,” Lerz said. How it ended up in a cesspit-turned-cellar is anyone’s guess.