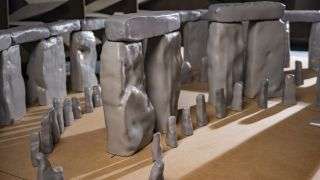 The small “bluestones” at Stonehenge were moved around by ancient people over the centuries. But the changes didn’t make much difference to the sound, which was dominated by the outer circle of large upright “sarsens.”

The huge standing stones in the outer circle of Stonehenge acted as an amplifier and gave reverberation to enhance speech and music in ceremonies held thousands of years before modern acoustics emerged, according to new research.

The dramatic sound effects — including the repeating echo of reverberation — would have been unfamiliar to most of the people who gathered there, the researchers said, although a few might have experienced similar effects inside caves and in canyons.

The findings help explain part of a long-standing mystery of archaeology — what effect did ancient sites and buildings, such as stone circles, burial chambers and ancient temples, have on sounds?

In the case of Stonehenge, which was first built around 5,000 years ago on Salisbury Plain in southwestern England, “the amplification could have aided speech communication, and the reverberation improved musical sounds,” wrote the researchers in a study published in the October issue of the Journal of Archaeological Science.

Their research is based on detailed examinations of a geometrically-accurate scale model one-twelfth the size of Stonehenge, as it probably looked and sounded during its prime, about 4,200 years ago.

By a curious coincidence, the model is exactly the same size as the miniature Stonehenge arch that appeared on stage in the 1984 movie “This Is Spinal Tap.” Film buffs may recall that it came about after a confused member of the eponymous rock band specified the stones should be 18 inches (45 centimeters) tall, instead of 18 feet (5.5 meters), which is about the height of one of the real Stonehenge arches.

Lead researcher Trevor Cox, a professor of acoustic engineering at the University of Salford near Manchester in England, gets “Spinal Tap” jokes whenever his research is mentioned. “It comes up every time,” he said.

To make the model, Cox and his colleagues spent several months pouring plaster mixed with plastic into 3D-printed molds, to sculpt a total of 157 stones — about twice as many as remain today.

Based on laser scans of Stonehenge provided by the English Heritage Trust, which manages the historic site, the model includes the central “horseshoe” of the five largest stone arches and dozens of the smaller “bluestones” that in real life were likely dragged from ancient quarries in Wales, more than 140 miles (225 km) away.

Crucially, the model monument also includes a complete outer circle of 30 upright sandstones and their lintels, called “sarsens” — from “Saracens,” a medieval English name for Arab Muslims that came to be used for anything thought to be pagan. Only 17 sarsen uprights and seven lintels remain intact in the outer circle today, and recent research suggests they were probably quarried nearby.

Cox emphasized the importance of creating an accurate representation of Stonehenge as it looked about 2200 B.C. so his team could learn how it sounded at that time.

They measured the sound levels at multiple locations around the model monument, both within the outer stone circle and outside it, using very high frequency sounds to compensate for its miniature scale — 12 times the frequency for structures one-twelfth of their normal size.

Such techniques have been applied since the 1930s to scale models of concert halls and opera houses, but they’ve never been used before on a model of Stonehenge, Cox said.

Acoustic studies have been made of the modern ruin of Stonehenge, which has about half as many stones as it did 4,000 years ago, and also at a complete replica of Stonehenge built as a war memorial near the town of Maryhill in southern Washington.

But the original Neolithic circle of standing stones reflected sound waves very differently than the few that remain, Cox said, and the uprights in the replica at Maryhill are simple rectangular slabs of concrete that do not have the same acoustic properties as the original hand-carved sandstones and their copies in the new model.

Their studies showed that speech made within the outer circle was amplified by the ring of standing stones by between 10% and 20%, or about 5 decibels, compared with speech in the open. They also found that the stones reverberated to mid-frequency sounds within the circle, with an average reverberation time of 0.64 seconds.

But they also found that speech or music made within the circle was much harder to hear outside it — and that suggests such activities at the center of Stonehenge were conducted for the benefit of a privileged few, rather than for a large congregation.

But while Stonehenge’s effects of reverberation and amplification could be dramatic, Cox said that they did not seem to be the main reason that Stonehenge was built.

The amplification and reverberation provided by the stones was less than perfect, he said. Yet there’s no archaeological evidence that the outer circle was ever changed from its original position. Meanwhile, there’s evidence that ancient people often moved the bluestones to new locations within the circle. This wouldn’t have changed the overall acoustics much, which are dominated by the outer circle, studies have found, according to Cox.

—Image gallery: Digging up at tomb at the Swedish Stonehenge

“There’s no real evidence that there were big changes to the acoustics in a lot of these rearrangements,” Cox said. “It doesn’t look like sound was driving it.” That suggests to him that the appearance of Stonehenge, rather than how it sounded, was the most important factor.

The technique could now be used in subterranean burial chambers, and Cox’s team hopes to look next at the acoustics of the Ring of Brodgar, standing stones on Scotland’s Orkney Islands and Neolithic stone circles in Portugal and Spain.

The work on his scale model has also given Cox a greater appreciation of how much work went into building the original Stonehenge.

“Laying them all out takes a few hours at one-to-12 scale,” he explained. “Can you imagine the full size of these things and moving them? It’s just incredible.”