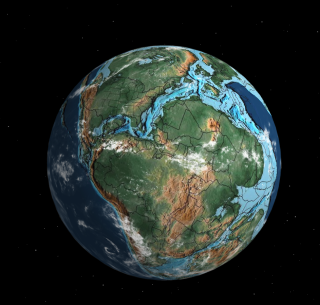 This is what the globe would look like 170 million years ago during the Jurassic Period.

If New York City were built 170 million years ago, when dinosaurs roamed the Earth, Africa would have been a short boat ride away.

During the Jurassic period, the supercontinent Pangaea — which formed tens of millions of years prior — would have been slowly splitting apart, the continents drifting toward their present-day positions, according to a new online interactive map.

The interactive map, designed by software engineer Ian Webster, visualizes how Earth’s continents evolved from about 750 million years ago to today, sweeping the user from a time when glaciers painted the planet white and an array of single-celled organisms such as green algae emerged, to a time when humans and climate change have become the globe’s biggest threat.

Webster built this digital globe while studying plate tectonics — a theory that the Earth’s outer shell is divided into pieces that move over the mantle with time, dragging continents with them. “I found that the data was difficult to consume and most interactive models were a bit dated or not generally accessible,” Webster told Live Scinece. “Once I had the idea, I built most of the project while on a long international flight.”

The map is built as a web application based on geological models created by geologist and paleogeography Christopher Scotese. The site uses a software called GPlates, developed by Caltech and the University of Sydney and used by geologists to visualize plate tectonic reconstructions through time.

— The 25 most mysterious archaeological finds on Earth

The user can type in the name of a city to see where that city stood on the planet millions of years ago. For example, 600 million years ago, the land that was to become Paris was hidden underwater; then by 200 million years ago, Paris had shifted to a spot near Canada. The model also lets users jump to different timepoints of firsts for the planet, such as when the “first” multicellular life forms appeared or when the first flowers and hominids appeared.

“One of my favorite parts is seeing how complex life developed relatively recently in geological terms,” Webster said. While the Earth formed 4.5 billion years ago, the first land plants only emerged around 430 million years ago, he added. “I enjoy seeing how the Appalachian Mountains developed,” he said. “They used to be as high as the Himalayas and have eroded over the eons.”

MH370 location data ‘could have been retrieved’ if Malaysia Airlines had...