Home History When the Romans turned Jerusalem into a pagan city, Jews revolted and... 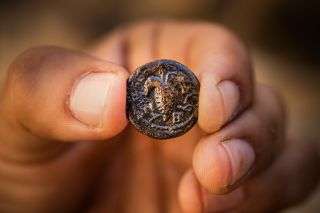 The bronze coin has the words “Year Two of the Freedom of Israel” with a cluster of grapes in the middle.

Archaeologists in Israel have discovered a rare coin minted about 1,900 years ago, when the Jewish people revolted against Roman occupation, the Israel Antiquities Authority announced (IAA) last week.

The bronze coin is so rare, that out of 22,000 coins found in archaeological excavations in the Old City of Jerusalem, just four are from the revolt, known as the Bar Kokhba revolt, Donald Tzvi Ariel, head of the Coin Department at the IAA, said in a statement.

A cluster of grapes and the inscription, “Year Two of the Freedom of Israel,” appear on one side of the coin, and on other is a palm tree with the word “Jerusalem,” making it the only coin on record from the revolt to bear the name “Jerusalem,” the IAA said.

What was the Bar Kokhba revolt?

When the revolt began in A.D. 132, Jerusalem was a Roman colony. Tensions were high between the Jewish people and the Romans, led by Emperor Hadrian (ruled A.D. 117-138), who planned to turn Jerusalem into Aelia Capitolina, a Roman city dedicated to the god Jupiter, according to the book “A Short History of the Jewish People: From Legendary Times to Modern Statehood” (Macmillan General Reference, 1998).

The leader of the revolt, Simon bar Kosiba (also spelled Shimon Ben-Kosiba), was nicknamed Bar Kokhba, or “son of the star.” That name suggested he was the messiah, as it drew from a line in the Torah (the Jewish Bible) that referenced the subject, Raymond Scheindlin, professor emeritus of medieval Hebrew literature, wrote in the book.

Bar Kokhba acted like a Judean king and military leader, and began issuing coins, such as the one recently unearthed in the William Davidson Archaeological Park.

Bar Kokhba coins are well known to archaeologists, the IAA’s Ariel said. Many of these coins (unlike this one) are found outside of Jerusalem, and each one helps researchers map out the revolt, he said.

So, how did this coin end up in Jerusalem?

“It is possible that a Roman soldier from the Tenth Legion found the coin during one of the battles across the country and brought it to their camp in Jerusalem as a souvenir,” archaeologists at the IAA said in the statement.

These coins usually feature the facade of the Temple, (the Romans destroyed the Second Temple in A.D. 70), as well as symbols associated with the temple, such as trumpets, a lyre, palm branches and amphorae (clay jugs), according to the Jewish Virtual Library.

Coins minted during the first two years of the revolt typically carry inscriptions saying “Redemption of Israel” and “Freedom of Israel,” but that changed to a message of hope with the inscription “For the Freedom of Jerusalem” during the third year, when the revolt became more of a defensive guerrilla action, according to the Jewish Virtual Library.

In what was likely an act of defiance, these coins were minted on Roman coins, the IAA said.

Despite their effects, the Bar Kokhba rebels were unable to breach the boundaries of ancient Jerusalem. Bar Kokhba was killed in 135, but the rebellion itself lasted almost five years.

After the Romans crushed the revolt, they unleashed a reign of terror on the Jews of Judea. The Romans deported the Jews there, sending many of them northward to Galilee and selling others as slaves. So many captives were sold, that it was said that the cost of a slave was depressed to that of a horse, Scheindlin wrote.

“Jerusalem was definitively turned into a pagan city, with a statue of Hadrian and perhaps a temple to Jupiter Capitolinus in its center; Jews were prohibited from even entering it,” Scheindlin wrote.

Even so, Bar Kokhba became a historical hero, according to the IAA.

The dig was paid for by the Ir David Foundation. It was done under the supervision of the Company for the Reconstruction and Development of the Jewish Quarter in the Old City of Jerusalem, Ltd. which is located between the Temple Mount and the City of David.

End of the world: Bible expert predicts rise and identity of...