DONALD Trump’s recent interview in which he was pressed over claims the US Government recently captured wreckage from a UFO aircraft revealed he knows more than he is letting on, a ufologist has claimed.

Mr Trump was briefed recently after Navy pilots reported seeing “strange objects” flying at hypersonic speeds and emitting “no visible engine or infrared exhaust plumes.” And his cagey response during an interview with Fox News’ Tucker Carlson, in which he also responded to claims that the US military had retrieved wreckage from a mysterious UFO aircraft crash and had stored it an an air force base, caught the attention of UFO researcher KM Lewis. Mr Lewis has recently written a novel entitled The Thirteenth Guardian, in which he outlines his extraordinary theory about Area 51, the secretive base in Nevada where conspiracy theorists claim the US Government is hiding evidence of extra-terrestrial technology.

He said: “I saw that interview; and also read the article on Express.co.uk.

“I did think the President’s body language and his desire to quickly change the topic suggests that he knows much more.

“I am convinced that there is a group of people that has gone to extreme lengths to conceal the real truth behind Area 51, Roswell and the unidentified craft/technology that people are seeing in the skies across the world today.

“A truth that has very far reaching implications.” 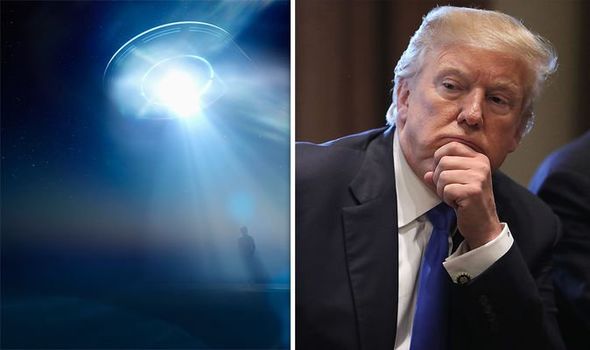 As well as Mr Trump, the US Defense Department also spoke to Senate Intelligence Committee Vice Chairman Mark Warner and two other senators about naval encounters with UFOs.

Mr Trump told Mr Carlson: “Well, I don’t want to really get into it too much. But personally, I tend to doubt it.

“I mean, you have people that swear by it, right?

“And pilots have come in and they said – and these are not pilots that are into that particular world, but we have had people saying that they’ve seen things.

“I’m not a believer, but you know, I guess anything is possible.

“I don’t assume it’s correct. But, I have an open mind, Tucker.”

Mr Lewis has been researching the topic of Area 51 for more than 10 years.

He said: “I have been researching the topic for more than ten years: There are so many things about our world that have made no sense to me in the construct of the world that we have been taught: UFOs, the Pyramids, H-Blocks in South America, Vimanas in India, Ezekiel’s Wheel in the Bible; just to name a few. 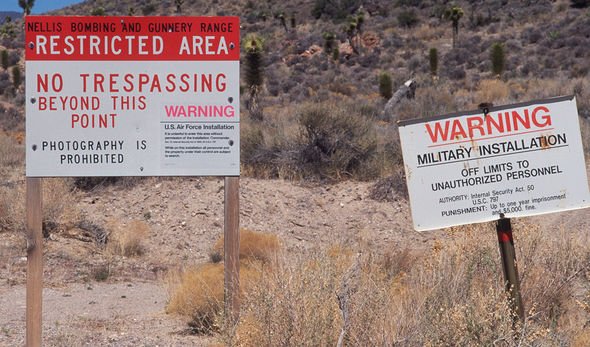 “All these things are very real and all suggest that there was very sophisticated technology that existed on Earth tens of thousands of years ago. Then it all vanished.

“I wanted to find out why. My research led me to a conclusion that sent chills down my spine – and that is why I wrote The Thirteenth Guardian.

“If true, it could be the greatest reveal in human history.

“And the government doesn’t want anyone to know.”

Weirdest Flat-Earth theories from a wall of ice guarded by NASA...