Home Science and Technology How Big Can Lightning Get? 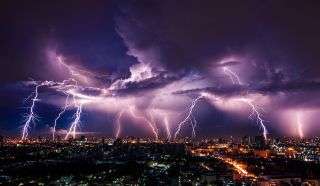 On Oct. 22, 2017, storm clouds gathering above the central United States released a flash of lightning so huge that it illuminated the skies above Texas, Oklahoma and Kansas. Horizontally spanning more than 310 miles (500 kilometers) across these three states, the jolt was so unprecedented that a group of researchers wrote a study about it, describing it as a “megaflash”: It was one of the longest lightning flashes ever recorded.

Typically, regular lightning flashes measure between just 0.6 miles and 20 miles (1 and 20 km) in length. But as increasingly sophisticated mapping techniques have revealed, some truly colossal bolts are crackling above our heads. These recent discoveries raise an interesting question: How big can lightning actually get? And should we be worried about these atmospheric heavyweights?

Lightning arises in storm clouds when strong positive charge develops in one region of the cloud and strong negative charge develops in another, creating electrical forces between them. “A lightning flash is initiated in a region where the electrical forces are extremely strong. They become strong enough that the air can’t withstand the electrical force anymore and breaks down,” said Don MacGorman, a physicist and senior researcher at the National Ocean and Atmospheric Administration (NOAA), and an author of the paper about the 2017 megaflash.

That means that as the electric force grows, it breaks down the air’s insulating power, which usually keeps areas of different charge separate from each other. Researchers thinks this occurs because the build up of the excessive electrical force starts to accelerate free electrons in the air — those not attached to an atom or a molecule — which in turn knock other electrons loose from their atoms and molecules, explained MacGorman. This continues, accelerating more and more electrons: “Scientists call this process an electron avalanche, and it’s what we mean when we say the air breaks down,” MacGorman told Live Science.

“Think of it as a giant spark that has grown through the cloud,” MacGorman said.

Sometimes, the lower region of a cloud, which usually contains positive charge, does not have enough charge on its own to stop the channel. So the lightning bolt continues growing, stretching downward toward the ground. As it does so, it draws an upward spark from the ground to meet it – triggering a lightning flash with huge electric currents that transport some of the storm’s charge to the ground. These cloud-to-ground channels are what most of us commonly picture when we think of lightning; those vivid forks that strike Earth.

But what factors limit the size of these massive bolts?

Researchers have been trying to answer this question for decades. Vertically, the extent of a flash is limited by the height of a storm cloud, or the distance from the ground to its pinnacle — which is about 12 miles (20 km) at its highest. But horizontally, an extensive cloud system provides much more room to play with.

Back in 1956, a meteorologist named Myron Ligda demonstrated this when he used radar to detect the longest lightning flash anyone had ever recorded at that point: a bolt that spanned 60 miles (100 km).

Then in 2007, researchers broke the record by identifying a flash over the state of Oklahoma that measured 200 miles (321 km) long. The recent study by MacGorman and his colleagues knocked that number out of the park. The light emitted by this flash was so strong that it illuminated a ground area of 26,000 square miles (67,845 square kilometers), the researchers calculated. But even that flash has now been surpassed: Another recent study in the journal JGR Atmospheres described a flash spanning 418 miles (673 km).

Such megaflashes are rare. But now that we have the technology to detect them, we’re finding them more frequently. Instead of relying only on ground-based systems that use antennas and radar to detect lightning, experts have started observing it from a very different vantage point: satellites. Both of the recent record-breaking flashes were measured using technology called a Geostationary Lightning Mapper, a sensor that’s present on two satellites orbiting Earth, which provides an expansive picture of the storm systems below.

“That system responds to the light emitted from a cloud top, so we see the light from the lightning flashes and can then map it, pretty much all over this hemisphere,” MacGorman said.

Combined with data from a ground-based system called the Lightning Mapping Array, this high-resolution visual satellite data painted a picture of the enormous extent of the lightning flash in October 2017.

However, we’re still in the dark about exactly how these huge electrical illuminations grow so long. Researchers believe that cloud size is one factor, because the larger the cloud system, the more potential there is for lightning flashes to occur within it. Also required, MacGorman adds, are certain “mesoscale processes — large scale wind flows that enable that system to be tied together to persist for a long time.”

So with the stage set by these monster clouds, what’s actually happening within them? “These megaflashes appear to be like a continuous sequence of discharges in very close succession,” said Christopher Emersic, a research fellow who studies thunderstorm electrification at the University of Manchester, in the U.K..

He hypothesizes that if a cloud system is highly charged across a large area, a series of discharges can propagate through it like a line of falling dominoes. “If dominoes are all set up without too big a gap, one triggers another in a large series of topples. Otherwise it ‘fails’ and, in this case, you’ll get only a smaller spatial lightning event rather than a megaflash,” Emersic told Live Science.

The larger the parent cloud, the more opportunity there is for the discharge to continue propagating. “Hence why megaflashes could, in principle, be as large as the parent cloud, should the charge structure be conducive,” Emersic said.

That also means there are likely much bigger flashes out there than we’ve already seen. “Storms can get larger than [the ones we’ve measured from],” MacGorman said.

In other words, we still don’t know exactly how big the biggest lightning bolt could be.

That said, because the cloud systems from which they originate are so vast, megaflash strikes can be difficult to predict.

“Such events can often lead to ground strikes far away from the main lightning activity in the convective core,” Emersic said. “Someone on the ground could think the storm has passed, but be caught by surprise by one of these spatially extensive discharges seemingly from nowhere.”

It’s also possible that in a warming world, there might be an uptick in the types of storms that give rise to megaflashes, Emersic said. “And so indirectly, that can make the conditions more likely, thereby increasing their frequency.”

For now, though, megaflashes aren’t that common: MacGorman estimates that they make up only about 1% of lightning flashes overall. Nevertheless, researchers like him will go on hunting — and no doubt discovering — even bigger behemoths for us to marvel at.