Home Planet Earth Earth has a new geologic age, linked to the flip of the... 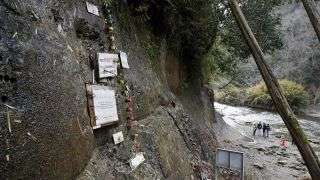 A photo shows the cliffside in Japan’s Chiba prefecture that’s part of a line of sediment that recorded the geologic history of the planet between 770,000 and 126,000 years ago.

Earth has a new age: the Chibanian geologic time interval, which took place from 770,000 to 126,000 years ago, thanks to a layer of sediment found on a riverside cliff in southern Japan.

The Chibanian age was named after Chiba, the Japanese prefecture where the sediment was found, and was recently ratified by the International Union of Geological Sciences. That period is important because it included the most recent reversal of Earth’s magnetic field, an article in Eos said. At various points in our planet’s history, Earth’s magnetic north and south poles have swapped locations. When that flip happens, it leaves a mark in rocks around the planet. The cliffside sediment in Chiba, Japan, may offer a richer record of that reversal than any other site on Earth.

That polar flip, known as the Brunhes-Matuyama reversal, is still the subject of some debate. A 2014 paper published in the Geophysical Journal International used information from a layer of sediment found in Italy to argue that the flip took place in the span of a few decades. A 2019 paper published in the journal Science Advances argued, relying on information from ancient lava flows in Hawaii, that the reversal took closer to 22,000 years. As an excellent geologic record of this flip, the Chiba sediment could eventually help resolve the debate.

Studying how the polarity reversal happened might help us understand what’s going on today. Our planet’s magnetic poles have wandered in recent years, and scientists don’t fully understand why.

Death toll from new coronavirus spikes in just a day