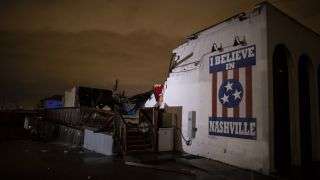 A mural reading “I believe in Nashville” remains intact on a collapsed wall in the East Nashville neighborhood on March 3, 2020 in Nashville, Tennessee.

Twenty-two people died and more went missing after a series of tornadoes hit central Tennessee early Tuesday morning (March 3), including one that ripped through the urban core of Nashville. Many more people were injured, according to the state’s governor, Bill Lee.

He said a statewide search and rescue effort was underway and that shelters had been opened around the state. Lee added that he had also requested federal support to manage the impacts of the storm. He encouraged Tennesseans to stay out of downtown Nashville and the other hard-hit areas.

“I encourage you all to pray for the families across our state that are facing tragedy right now and that are dealing with heartache and hardship in ways that only they know,” Lee said in a news conference.

The first tornado alerts went off about 45 minutes past midnight local time.

“Confirmed tornado northwest of downtown Nashville. TAKE COVER NOW IF YOU ARE IN DAVIDSON, WILSON OR SUMNER COUNTIES!” the Nashville office of the National Weather Service announced.

The downtown Nashville tornado “shredded” more than 40 buildings, according to The Weather Channel. A photojournalist captured part of that tornado’s passage on video, with several bright flashes appearing as the twister hit electrical infrastructure. According to PowerOutage.us, more than 20,000 homes and businesses remain without power as of this writing, down from 50,000 earlier.

Tornadoes are notoriously difficult to predict. Meteorologists might see a supercell storm forming, as happened over Tennessee last night, and most tornadoes spin off of those storms. But we can’t yet predict which of these storms will spawn tornadoes, how bad those tornadoes will be or where within the storm they will touch down.

“It’s easy enough to put a thunderstorm together. It’s very difficult to get that thunderstorm to produce a significant tornado,” Greg Carbin, the warning coordination meteorologist with the Storm Prediction Center in Norman, Oklahoma, told Live Science in 2011.

Tornadoes are relatively rare events, but they seem to occur when a block of rising warm air meets a block of falling cool air and both blocks spin horizontally — then get knocked on their sides. These twisters are most common between March and June in the United States, and they tend to touch down in “Tornado Alley.” This wide, flat stretch of the country sits between the Dakotas and the Gulf Coast, bordered on either side by the Rocky Mountains and the Appalachian range.

As of Tuesday morning, search and rescue operations in Tennessee were ongoing and the extent of the damage was not fully understood.

End of the world: Pope ‘central to apocalypse prophecy’ as doomsday...