Home Planet Earth How much plastic actually gets recycled? 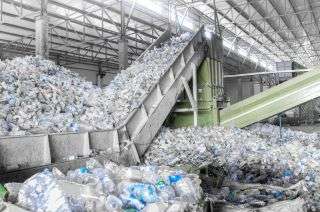 In 2017, the U.S. produced nearly 35.4 million tons (32 million metric tons) of the stuff, according to the Environmental Protection Agency. If you want to reduce your own contribution to the plastic pollution problem, recycling might seem like an easy solution.

But what happens after you clean out those plastic containers and dump them into a recycling bin?

Unfortunately, the outcome isn’t as rosy as many people think; recycling is unlikely to give plastic to-go containers new life, said John Hocevar, a marine biologist with Greenpeace USA. Of all the waste produced in 2017, only 8.4% of it eventually got recycled, according to the Environmental Protection Agency. It’s not so much that consumers aren’t motivated to recycle or that they don’t have ready access to recycling programs; the United States simply doesn’t have the proper infrastructure.

“In most of the country, most types of plastic are not recyclable,” Hocevar told Live Science.

A recent report released by Greenpeace surveyed the United States’ 367 materials recovery facilities — the facilities that sort our recycling — and found that only plastic bottles are regularly recycled. The fate of most other types of plastic, from clamshells to packaging, is usually a landfill or incineration.

Not all plastic is created equal. If you turn over a clear plastic bottle, like those used to hold ketchup or laundry detergent, you’ll notice a number “1” inside a triangular recycling symbol — that means it’s made of a material called PET (polyethylene terephthalate). Opaque jugs, like the kind that hold milk, get a “2,” meaning they’re made of a material called HDPE (high-density polyethylene). At materials recovery facilities, or MRFs, plastics get sorted based on these numbers (they go up to 7), which designate how recyclable they are.

Numbers 1 and 2 are relatively recyclable, said Kara Pochiro, communications director for the Association of Plastic Recyclers. These materials get chopped up, melted into pellets and sold to manufacturers for reuse.

“They can be made into carpet, clothing, plastic packaging,” as well as other products, Pochiro told Live Science.

Recycling gets more complicated with higher numbers, called “mixed plastic,” Pochiro said. This waste makes up around 69% of all the plastic we use, according to the Greenpeace report. It’s much more expensive and energy intensive to process than numbers 1 and 2. In the past, many recycling facilities would export mixed plastics, often to China. But two years ago, China banned the import of foreign plastic waste.

Recycling facilities had to scramble to find a new market. Many failed. For example, in Los Angeles, recycling facilities still won’t process any plastics with numbers higher than 2. Instead, MRFs are dumping them in landfills or incinerators, The Guardian reported last year.

China’s new policy, however, hasn’t done much to change the fate of U.S. plastic, Hocevar said. Many of the bales of plastic that got shipped to China were contaminated with non-recyclable trash, he said. Those unusable bales got thrown in landfills or into the ocean.  The problem hasn’t gotten worse — it’s just moved onto U.S. soil, he said.

“They would just bundle it all together and ship it off to China. What happened to it was not at all transparent,” Hocevar said. There was no way to tell what was or wasn’t getting recycled, he added.

What the United States needs is infrastructure equipped to process other kinds of plastic, Pochiro said. But Hocevar envisions a different solution: “The really simple answer is we have to stop making so much throwaway plastic.”

That said, is recycling worth it? For bottles labeled “1” or “2”, the answer is “yes,” Pochiro said. There’s also a growing market for plastics labeled “5,” a flexible plastic that includes mini-yogurt containers. An increasing percentage of fives are actually getting recycled. For other numbers, it’s important to check the restrictions of your local recycling facility, Pochiro said.

Hocevar’s answer was simpler: a resounding “no” on numbers 3, 4, 6 and 7. These plastics just gunk up an already strained recycling system, he said.

“It does more harm than good,” Hocevar said.