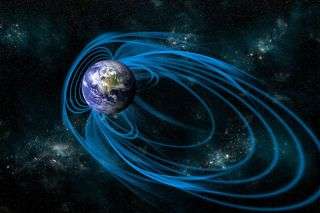 Earth is an enormous magnet, its iron-rich core creating a shield of magnetic field that envelopes the planet —— well, almost. A “dent” in this magnetic field known as the South Atlantic Anomaly allows charged particles from the sun to dip closer to the planet in an area over South America and the Southern Atlantic Ocean.

These particles, at the very least, can mess with instruments up in space. So NASA scientists and other researchers have no choice but to adapt to this hiccup in the magnetic field, switching off satellite instruments that pass through the SAA and accepting the loss of some data on instruments aboard the International Space Station (ISS). They’re also keeping close tabs on the SAA, according to a new article from NASA’s Goddard Space Flight Center.

“Even though the SAA is slow-moving, it is going through some change in morphology, so it’s also important that we keep observing it,” Terry Sabaka, a geophysicist at Goddard in Maryland, said in the piece.

Earth’s magnetic field is the product of its iron-rich outer core, which creates the field as it swirls around the inner core. The field protects Earth’s atmosphere from being slowly stripped away by charged particles from the sun. It also protects electronic equipment on Earth from this same bombardment.

Normally, particles from the sun are either deflected by the field or become trapped in two zones called the Van Allen Belts, which allow the particles no closer than about 400 miles (644 kilometers) from Earth’s surface. This provides plenty of room to protect the planet and its human-launched satellites. The ISS, for example, orbits about 220 miles (350 km) above the Earth’s surface.

But the magnetic field is weakening, making some scientists think it might be about to reverse, swapping its north and south poles. (Alternatively, it might go through a weak phase and then strengthen again, as has happened in the past.) Ground zero for this weakening seems to be the South Atlantic Anomaly, an odd spot of particular weakness that stretches between South America and Africa. The zone is changing, with recent research suggesting that it is developing not one, but two, separate low points.

Already, satellites that pass through the SAA must do so with many sensitive instruments turned off, according to Goddard. When the ISS passes through it, some of the space station’s instruments are vulnerable to “blips” caused by the greater exposure to solar particles. The Global Ecosystem Dynamics Investigation (GEDI) mission, for example, experiences a power reset about once a month and loses a few hours of data each time thanks to the SAA.

Luckily, “these events cause no harm to GEDI,” Bryan Blair, the mission’s deputy principal investigator and a lidar instrument scientist at Goddard, said in the agency’s article.

Goddard scientists and their colleagues around the globe are keeping tabs on the SAA, both to make sure their operations are protected from its effects and to try to understand how the anomaly will change in the future.

Using data from SAMPEX (the Solar Anomalous and Magnetospheric Particle Explorer), a satellite that launched in 1992 and collected data until 2012, Goddard researchers learned that the SAA is drifting slightly westward, results published in the journal Space Weather in 2016. The European Space Agency (ESA) launched a set of satellites known as Swarm in 2013 that provide detailed observations of the Earth’s magnetic field and changes in the SAA. It was data from Swarm satellites that showed the development of two separate minimum-strength points in the SAA, hinting that the anomaly might split into two separate zones.

—Earth from above: 101 stunning images from orbit

—11 strange and mysterious sounds on Earth and beyond

—5 ways the world will change radically this century

Analyzing this data allows satellite engineers to design their satellites to withstand the amount of solar radiation that they’ll likely encounter once in orbit, according to Goddard. Researchers are also combining the observational data with models of Earth’s core dynamics to try to predict what the anomaly will do next.

“This is similar to how weather forecasts are produced, but we are working with much longer time scales,” Andrew Tangborn, a mathematician in Goddard’s Planetary Geodynamics Laboratory, said in the Goddard article.

Meanwhile, researchers outside of NASA are working to understand the links between the movement of the outer core and the features of the magnetic field it produces. Researchers from the University of Liverpool in England recently reported that volcanic rocks made from lava that erupted long ago on the Atlantic island of Saint Helena show magnetic anomalies dating back to between 8 million and 11.5 million years ago, suggesting that this area of the South Atlantic Anomaly has been unstable for millions of years.