Home Planet Earth Magnitude-6.5 quake in Nevada has a long history of temblors 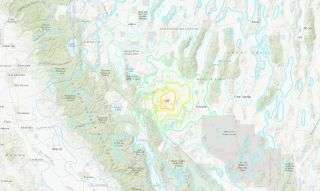 The magnitude-6.5 earthquake happened near the Nevada-California border.

A magnitude-6.5 earthquake rattled western Nevada just before sunrise today (May 15), waking up people at 4:03 a.m. local time (11:03 UTC), well before their morning alarms went off, according to news reports.

This is the strongest earthquake to shake Nevada in 65 years. As of 5 a.m. local time (12:00 UTC), six magnitude-4 or higher aftershocks had already rocked the region, including a magnitude-5.1 aftershock just 23 minutes later, at 4:26 a.m. local time, according to the U.S. Geological Survey (USGS).

The earthquake struck 34.7 miles (56 kilometers) west of Tonopah, Nevada, near the California-Nevada border, about 120 miles (193 km) southeast of Carson City. Shaking was felt as far away as Sacramento and Reno. People also reported feeling shaking in Las Vegas, about 200 miles (330 km) southeast of the quake’s epicenter. So far, there aren’t any reports of injuries.

The earthquake originated 1.7 miles (2.8 km) underground, in the shallow crust of the North American plate. The USGS has classified it as a strike slip fault, which happens at vertical fractures when the rocky plates that make up Earth’s surface move horizontally. To visualize this movement, place two fists together and move one backward, or watch this 1-second USGS video.

Within hours of the earthquake, 15,000 people responded to the “Did You Feel It?” site on USGS.

The earthquake happened within Walker Lane, an active seismic zone located along part of the California-Nevada border. The Walker Lane zone is a hotspot; it contains up to 25% of the motion where the North America and Pacific Plate interact, USGS said. The remainder of that motion largely happens in the San Andreas fault system.

Over the past 50 years, about two dozen magnitude-5 or higher earthquakes have hit within 62 miles (100 km) of today’s spot, largely to the west and south, USGS reported. In roughly the same region, for instance, a magnitude-6.8 earthquake struck in December 1932 and a magnitude-6.5 quake hit in January 1934.

Within hours of today’s earthquake, 15,000 people reported feeling the shaking as “strong” to “very strong” on the “Did You Feel It?” USGS page.

The earthquake damaged the U.S. 95 highway between Las Vegas and Reno, prompting officials to close it early this morning. The Nevada Highway Patrol tweeted photos of the damage today, saying that U.S. 95 was closed in both directions after being damaged at mile marker 98.

#earthquake This mornings earthquake outside Tonopah has damaged a portion of US95 at Mile Marker 98 in Esmerelda County. US 95 is closed in both directions, seek alternate routes. DOT is on scene making repairs, no timeframe given. #nhpsocomm pic.twitter.com/IF2Dp1s3ZcMay 15, 2020