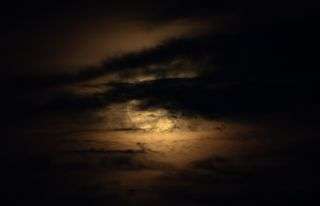 There’s no use sugar coating it: According to one scribe in medieval England, A.D. 1110  was a “disastrous year.” Torrential rainfall damaged crops, famine stalked the land — and, as if that wasn’t bad enough, on one fateful night in May, the moon simply vanished from the sky.

“On the fifth night in the month of May appeared the moon shining bright in the evening, and afterwards by little and little its light diminished,” the unnamed scribe wrote in the Anglo-Saxon manuscript known as the Peterborough Chronicle. “As soon as night came, it was so completely extinguished withal, that neither light, nor orb, nor anything at all of it was seen. And so it continued nearly until day, and then appeared shining full and bright.”

Clouds weren’t the problem; if they were, the scribe would not go on to describe how bright and twinkling the stars appeared while the moon faded from view. Nor was the moon being eclipsed by Earth’s shadow — if it was, the skywatcher would have seen the orb become a coppery “blood moon,” not an eerie blank spot in the sky.

So, what made the moon disappear in an already dismal year? According to a study published April 21 in the journal Scientific Reports, the explanation for both the moon’s mysterious vanishing act and the rain-ravaged summer that followed may be one and the same — volcanoes.

“The spectacular atmospheric optical phenomena associated with high-altitude volcanic aerosols have caught the attention of chroniclers since ancient times,” the study authors wrote. “Careful evaluation of ice core records points to the occurrence of several closely spaced volcanic eruptions,” which may have occurred in Europe or Asia between A.D. 1108 and A.D. 1110.

Those volcanic events, which the researchers call a “forgotten cluster” of eruptions because they were sparsely documented by historians at the time, may have released towering clouds of ash that traveled far around the world for years on end. Not only could a high-altitude veil of volcanic aerosols blot out the moon while leaving many stars unobscured, as the Peterborough writer described, but a series of large eruptions could have also disrupted the global climate, the researcher wrote, causing or exacerbated the cold, wet weather that made life so miserable in A.D. 1110.

One such eruption, which occurred in Japan in A.D. 1108, could be to blame, the team said.

Hunting for the ‘forgotten’

For evidence of these “forgotten” eruptions, the researchers looked at ice cores from Greenland and Antarctica — long tubes of ancient ice that can reveal what the global climate looked like at the time, as well as what sorts of particles were floating around in the atmosphere. The team saw an increase in sulfate aerosols (a component of volcanic ash) in both cores between A.D. 1108 and A.D. 1110, suggesting that the stratosphere was sprinkled with fumes from a recent eruption.

The team found further evidence of volcanic activity in tree rings dating from the same period. The rings, which change thickness in response to climate patterns, revealed that 1109 was an unusually cold, wet year in Western Europe — a climatic “anomaly” comparable to the effects of several other major volcanic eruptions from history, the researchers said. The team also tracked down 13 narrative accounts of adverse weather, crop failure and famine from that time period, further supporting the theory that a series of eruptions had slammed Europe’s climate.

“The sources of these eruptions remain unknown,” the team wrote, “yet one eruption with a historical date in this period is that of Mount Asama in Japan.”

According to a diary the team examined, written by a Japanese statesman between 1062 and 1141, the eruption of Mount Asama in central Japan began in late August 1108 and lasted until October of that year.

This eruption, which the statesman described as throwing fire into the sky and rendering nearby fields unfit for cultivation, could have plausibly contributed to the sulfate spike in the Greenland ice core and polluted the sky with enough aerosols to induce the eclipse two years later, the team wrote. (Another unknown eruption, located somewhere in the southern hemisphere and also dating to 1108, likely contributed to the sulfates in the Antarctic ice core, the researchers added.)

While this explanation relies on a lot of “indirect” evidence, the researchers said, it still provides the best solution yet for the case of the disappearing moon.