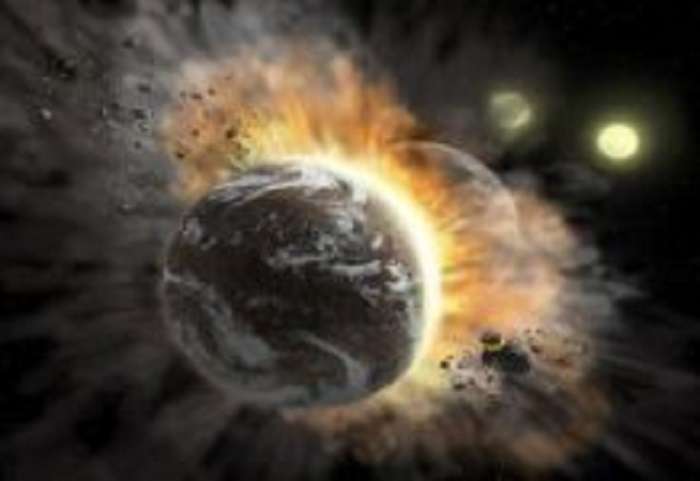 NASA astronomers said they discovered the first planet, which in its parameters is almost identical to the Earth, and is also located in the “inhabited zone” near its star, which creates conditions for the presence of water in liquid form and the development of microorganisms. This is stated in a NASA press release.

The discovered planet is 20 percent larger than the Earth, however, it is located in the so-called “Zlatovlaski belt,” that is, at such a distance from the nearest star that it implies the existence of water in liquid form and conditions for the development of life. This is a potentially inhabited world.
NASA modeled exoplanet collision
The planet was called TOI 700 d and was discovered using the TESS satellite and the Spitzer space telescope. The celestial body is located near the cold dwarf star of class M – TOI 700. This star system is located very far from Earth, in the southern constellation Golden Fish – at a distance of 100 light years.

Scientists especially noted that for all the time of observations they did not record outbreaks on the TOI 700 star. And this significantly increases the chances that the planet TOI 700 d receives as much light and heat as is necessary for the birth of life. If the star were brighter, the discovered planet would be too hot.

Two other planets of different sizes also rotate around the TOI 700 star. According to assumptions, one of them may be a gas giant, like Saturn.

The exact climate conditions on the discovered planet TOI 700 d are still unknown, but astronomers have modeled 20 versions of what this celestial body can be, based on the size of the planet and the type of star around which it orbits.

One proposed model describes TOI 700 d as a planet completely covered by an ocean with a dense atmosphere dominated by carbon dioxide. Another model depicts TOI 700 d as a cloudless planet with continents and oceans. In this case, it is even more like the modern Earth.

Newborn triplets all test positive for coronavirus in ‘unprecedented’ case