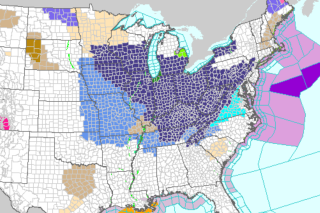 A National Weather Service map shows where freeze warnings (navy) are in effect for this weekend.

Temperatures are expected to drop to record lows for this time of year across much of the northern U.S east of the Rocky Mountains. The culprit? A low-pressure mass of Arctic air is making its way down through Ontario, Canada, according to the National Weather Service (NWS).

“Temperatures will be quite chilly for middle May, a good 20 degrees below normal,” on Saturday (May 9), the New York NWS wrote in a Friday forecast discussion. Rain is likely, and flurries are possible, though the mid-May sun makes them unlikely, according to the NWS.

A map shows snowfall predictions for the weekend.

Farther north and west, things will be colder, with freeze warnings in place across parts of the Great Plains, Appalachians and the Northeast. Several inches of snow are possible in northern Appalachia, according to the national forecast. Lake-effect snow is possible by the Great Lakes, and high winds are expected across the Northeast as the low-pressure system turns into a bona fide storm system.

The air mass making its way south is part of what’s often called the “polar vortex,” a swirl of frigid air usually confined to the Arctic by the circulating atmospheric current known as the jet stream. Sometimes, wobbles in the jet stream allow some of that Arctic air to escape south, according to the NWS.

The relationship between polar vortex escapes like this and climate change isn’t yet fully understood, but many studies (summarized in this paper published in the journal Science Advances in 2018) have found climate change effects can disturb the jet stream and lead to extreme weather events.

The Weather Channel reported that this weekend should see multiple low-temperature and possibly low-pressure records fall. Meanwhile, a high-pressure block of lower-latitude air “bulging” northward to the west should bring extreme heat to the other side of the Rocky Mountains.

In other words, it will be an extreme weather weekend all over the country, not fully clearing up after Mother’s Day on Sunday (May 10).