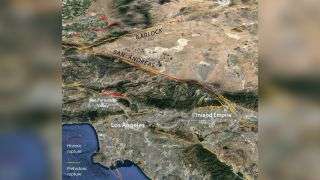 The Garlock Fault touches the San Andreas Fault, which could devastate Los Angeles if a big earthquake struck it.

It’s impossible to know when the San Andreas Fault will erupt with its next big earthquake — a temblor that could impact the nearly 13 million people who live in the Los Angeles metro area — but it appears that two other nearby faults might have some say in that matter.

These successive earthquakes wouldn’t necessarily happen all at once, but over a period of time (perhaps even decades) as stress builds up and gets transferred from one fault to the next, said study co-author Ross Stein, a geophysicist and the founder and CEO of Temblor, Inc., a company that models and assesses earthquake risks.

«What we are describing isn’t likely and it’s a kind of an earthquake chain reaction,» Stein told Live Science. «But what we’ve learned over the last four months is chain reactions really do happen in nature. And if we are unprepared, as we were in COVID, they have enormous consequences.»

There are so many faults (and earthquakes) in California because that’s where the Pacific Plate grinds against the North American tectonic plate. However, the San Andreas Fault, which snakes roughly 800 miles (1,287 kilometers) from the Salton Sea to the Mendocino Coast, is notorious because it caused the deadliest earthquake in the nation’s history; the 1906 magnitude-7.8 San Francisco earthquake killed an estimated 3,000 people.

The new analysis of this possible «earthquake chain reaction» suggests that another large San Andreas rumbler near Los Angeles is now 3.5 to 5 times more likely than scientists previously thought, thanks to the Ridgecrest quakes.

The Garlock Fault is relatively quiet; it hasn’t released a significant earthquake in about 500 years. But if the Garlock Fault ruptures within about 30 miles (45 km) of its junction with the San Andreas Fault, it could raise the likelihood of a San Andreas quake to the southeast — the so-called Mojave section — by a factor of about 150, Stein and study co-author Shinji Toda, a professor of natural disaster research who specializes in seismology at Tohoku University in Japan, wrote on the Temblor blog.

Such an earthquake could be catastrophic. Were a magnitude-7.8 earthquake to hit the southern San Andreas Fault, it could cause more than 1,800 deaths, 50,000 injuries and $200 billion in damage and other losses, according to a 2008 report from the U.S. Geological Survey.

Triggered by an earthquake

«Ridgecrest was a humbling experience,» Stein told Live Science. «I think anybody would have told you that given how well mapped California is, that any fault that can [release] a 7.1 would have been known. And it was unknown.»

The 2019 earthquakes along Ridgecrest added stress along the Garlock Fault, according to information gleaned from satellite data, Stein said.

However, the area’s big earthquakes don’t happen like clockwork, so it’s challenging to know when the next powerful one might hit, Stein noted. So, to forecast when the next massive earthquake might strike, Stein and Toda developed a new forecasting method. (To be clear, a forecast is not the same as a prediction, because it’s impossible to predict earthquakes. Instead, forecasts look at probability, or the chance that an earthquake of a certain magnitude might happen in a given place and time period.)

This machine-learning model looked at how stress was transferred by earthquakes and used past earthquakes to test its accuracy. In fact, the model shows that the June 2020 Ridgecrest earthquakes fit into the forecast for the region.

The model showed — in part because of the added stress from the recent Ridgecrest earthquakes — that the Garlock Fault has a 2.3% chance of producing a magnitude-7.7 earthquake in the next year, or a 1 in 43 probability. This chance is 100 times higher than the 0.023% chance given by the Third California Earthquake Rupture Forecast (UCERF3), a forecast that is put out by the Southern California Earthquake Center and the California Geological Survey and released in 2017.

If the Garlock Fault ruptures within about 30 miles (45 kilometers) of its junction with the San Andreas Fault, it could raise the likelihood of an earthquake in the Mojave section of the San Andreas. What should Californians do?

There’s another way of looking at the 1.15% chance that the San Andreas Fault will rupture and trigger the Big One, and it’s this: There’s a 98.85% percent chance that it won’t happen.

Even so, it’s good that the public and public-policy experts be aware of this chance, however small, Stein said. It could also serve as a gentle reminder that people living near the San Andreas Fault should retrofit their houses to make them earthquake-ready, assemble earthquake-preparedness kits and buy earthquake insurance, Stein said.

«If you’re a homeowner and you’ve been on the fence about earthquake insurance [because] it’s too expensive,» keep in mind that your risk just went up by a factor of 3.5 to 5, Stein said. It doesn’t appear that insurance companies are raising rates because of this study, «so you’re basically getting insurance at a colossal discount,» he said.

Other geophysicists have pointed out that the new study’s model doesn’t account for the Earth’s intricacies. For instance, the model doesn’t incorporate the complexities of fluid interactions, which can change stresses on faults over time, nor does it factor in the different types of rock in that region, Pablo Gonzalez, a geophysicist with the University of Liverpool in England, who was not part of the study, told National Geographic.

Stein said that since the study came out in the journal Bulletin of the Seismological Society of America on July 14, he’s talked with a number of colleagues who have pointed out issues with the model. Many of these issues are addressed in the study’s supplementary data, he said, but even so, models can never completely mimic real-world situations.

«I feel that what we are saying is speculative and it’s uncertain, and we acknowledge that and we understand that,» Stein said. «But the flip side of that coin is [that] the consequences of this are so important that we should try to estimate it, and this should start a discussion of what we should be putting in our models of earthquake occurrence.»

Life after death: ‘Jesus sat next to me’ Woman shares her...