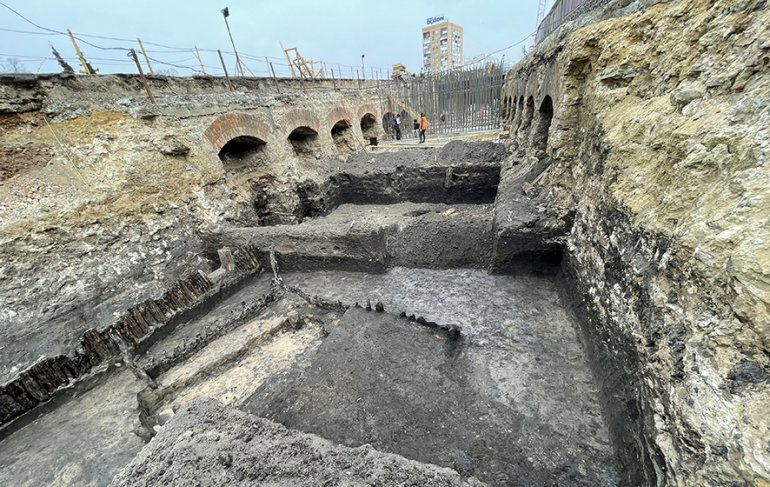 During the archaeological research of the expedition of the Institute of Archaeology of the Russian Academy of Sciences in the area of reconstruction of the Red (Mariinsky) Bridge in the city of Orel traces of the ancient Russian settlement were found.

The data obtained together with the previous studies in 1980s – 2010s suggest that the settlement dated XI – first half of XIII century, was located in a historical part of the Eagle: from the area near the modern Red Bridge to the arrow at the inflow of the river Orlik in the Oka.

There are traces of a strong fire over the whole area of the remains of the building. Specialists gathered a collection of pottery of the 11th – first half of the 13th centuries and other artifacts: iron knives and petiole arrowheads, a frame from a buckle and a fragment of a pendant axe made of colored metal, as well as slate weights for hand spindles (spinners) and fragments of glass bracelets, common in Russia in the pre-Mongolian period.

Excavations helped to trace the building of the site in the area of the Red Bridge to the end of the XVIII century. In the XVI century there was built Orlovsky fortress with inhabited territory outside the walls of the fortress – posadom. During the excavations, scientists also discovered a section of the early city wall of the plantation with a length of 18 meters. According to preliminary version, it burned down at the end of the XVII century.

They also found a wooden building measuring 5×4 meters, which existed in the XVIII century. Here they found copper coins of different denominations from 1730 to 1771, body crosses, buttons, cufflinks, fragments of tiles, leather shoes, glass and ceramic dishes. After the building burned down in the late 18th century, it was replaced by the poles of a wooden bridge across the Oka.

Archaeologists have collected over a thousand objects of metal, leather, wood, birch bark, glass and more than fifteen thousand fragments of ceramic and glassware. These include large fragments of two glass jugs, which most likely were made in the middle of the XVIII century at the Izmailovo glassworks. One of the jugs is decorated with a polychrome painting with floral ornamentation and an image of a two-headed eagle, while the other is framed by a wide openwork neck. The latter was reconstructed almost completely. In addition, archaeologists gathered a large collection of coins from the XVI to the XVIII century.