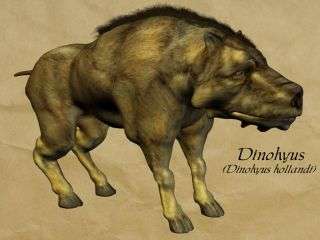 Dinohyus hollandi was a species of entelodont, of hell pig.

Entelodont is a name given to any member of the extinct scientific family Entelodontidae. These large, primitive animals are also known as hell pigs. However, they are not related to modern pigs; rather, they are closer on the evolutionary tree to hippos and whales.

Entelodonts were among the earliest of the pig-like lineages, known from the early to middle Eocene (c. 50 million years ago), according to Kenneth T. Wilkins, associate dean for sciences at Baylor University, Waco, Texas.

Entelodontidae first appeared in Mongolia, then spread across Asia, Europe and North America. They eventually became extinct between 19 million and 16 million years ago, according to Encyclopedia Britannica.

In North America, the hell pigs seemed to prefer floodplains as their home of choice. Woodlands where also preferred by hell pigs of many types.

One of the better-known entelodonts was , which were common in western North America. These were large animals, several times the size of modern pigs, with the skull reaching near more than 3 feet (1 meter) long. «The dentition suggests they were effective bone-crushers. These surely were fierce, imposing animals . . . hence, the common name ‘hell pig,'» said Wilkins.

Many hell pigs had heads that were massive when compared to their bodies. Another example is the . Its head was 35 to 45 percent of its total length, according to Encyclopedia Britannica.

Large scars, up to 0.8 inches (2 centimeters) deep, found on the remains of hell pigs suggests that they fought with their own kind. Research also suggest that one hell pig would even put another’s head in its mouth during a fight, according to BBC Nature. The hell pigs had boney areas on their faces that protected their nose and eyes during these types of attacks.

Though it would be easy to assume that such a fierce creature with large tusks and imposing body size were carnivorous predators, the hell pig’s teeth say differently. More than likely, they were omnivores, eating plant life as well as meat.

The front teeth where large and pointed, perfect for ripping flesh from bone. The back teeth were flat, which is perfect for crushing plant material. Fruits, leaves and seeds, as well as other animals and eggs were probably all part of the hell pig’s diet.

It may not have even been a killer. Some believe that hell pigs may have been scavengers, letting other animals make the kills. Once the prey was dead, the hell pig may have intimidated the predator and taken its prey, according to National Geographic.