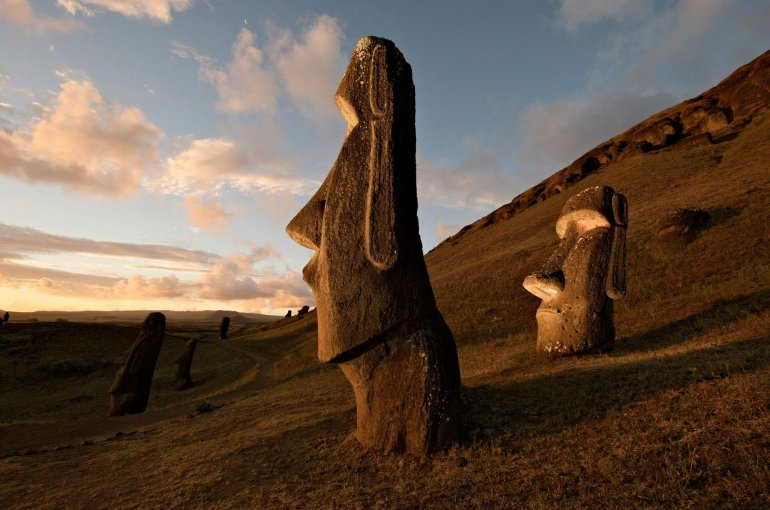 Seventy cannons, two hundred and twenty-three sailors and soldiers, and three ships: the Arend, the Tinhoven, and the Afrikaanshe Galei were ready for Jacob Roggevain’s expedition in 1721. The ships left Texel Harbor in the Netherlands and set a course for Cape Horn. The original plan was to search for the mysterious Southern Continent, but something went wrong. The sailors circled South America, entered the Pacific Ocean and set a course for the northwest. And on April 5, 1722 they discovered a quiet and densely populated island. The head of the expedition named it Easter Island because it was a holiday on the day of discovery Moai.

The island turned out to be inhabited. But the Dutch were struck by something else – the stern, frowning eyebrows, huge stone statues up to 20 meters high.

Moai (rap. Moai) are stone idols on the coast of Easter Island. The statues resemble a human head with part of the torso at the waist. They are gloomy faces with low foreheads and compressed lips. There are a total of 997 of them on the island.

It is still not clear why the islanders created these figures. At first, their height did not exceed human height, and the material was basalt. Then it was replaced by soft volcanic tuff (compressed volcanic ash). Only 53 moai statues were made of rocks other than tuff.

Scientists from the United States, New Zealand and Chile were trying to solve the mystery. According to their version, the inhabitants of the island – Rapa Nui – believed that the stone figures preserved the fertility of the land. Specialists have come to this conclusion by studying two moai, which are located in the quarries of the volcano Rano-Raraku in the central part of the island. The volcano was not only the source of material for most of the statues, but also served as a fertile agricultural center. Scientists took soil samples, after analyzing which it became clear that the Rapa Nui grew bananas, colocasia, and yams in the area. These soils were believed to be the most fertile on the entire island.

Frowned eyebrows, tightly compressed lips and wide forehead – why are Moai like that?

According to researchers, the giant human figures carved out of volcanic rock are the dead ancestors of the locals. They believed about the connection to the weather, which influenced the family’s standard of living. Each family made their own ancestor statue and the more the better, because it influenced the weather. And this is the key to a rich harvest and prosperity. On the back of each stone statue there are inscriptions, the sculptors’ signatures and the owners’ names. On the heads of some of the statues you can see the red hats that weigh 15 tons. These are pucao.

How the ancient inhabitants of the island managed to create, erect and place moai throughout the island is not clear. Many books have been written about Easter Island and more than one scientific study has been done. There are a lot of versions. We can only guess what secrets are kept by the ancient figures. English explorer Kathryn Rutledge in her work on the mountainous place aptly noted: “This is the place where the past is the present,” she wrote in her book “Mysteries of Easter Island. By the way, she never solved the riddle.

A new “fossil galaxy” buried inside our Milky Way has been...

Coronavirus nurse who wore lingerie under PPE gets job offer for...