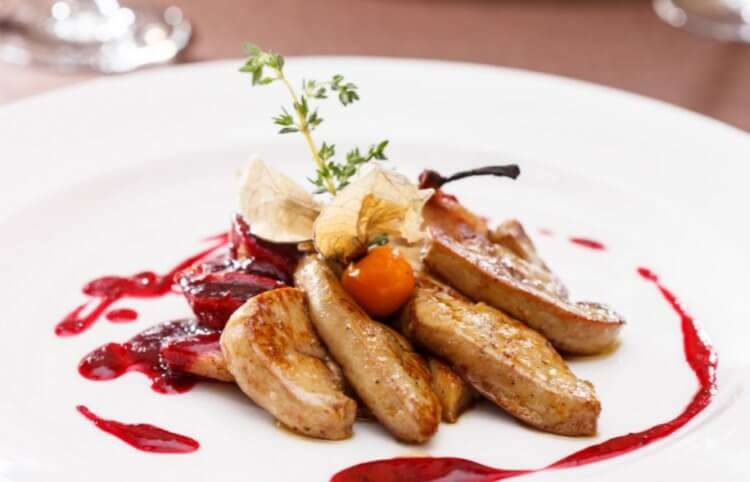 If you knew how some foods are made, you would never eat them. Take, for example, foie gras, a delicacy that supposedly every visitor to France must try. In fact, this dish is the liver of an overfed goose or duck. The producers of the delicacy insert a tube down the animals’ throats through which they force-feed them food. It sounds just awful and, without any exaggeration, it is real torture for the living organisms. The animal protection organizations PETA and HSUS have called on the whole world to stop producing foie gras, and the Austrian zoologist Konrad Lorenz called the force-feeding of animals «a disgrace for all Europe.» Fortunately, the French company Gourmey has recently learned how to make artificial foie gras, which is virtually indistinguishable from the real thing. Perhaps this invention will save geese and ducks from terrible torment.

The process of making foie gras looks horrible, but soon the animals’ torment may be over

What is foie gras?

As stated at the beginning of this article, foie gras is the liver of domestic birds that have been subjected to overfeeding. One of the most famous dishes of French cuisine is known to be a pâté that literally melts in the mouth. The taste of foie gras has been described as buttery and delicate, and it is much better than the usual goose and duck liver pâté. But is all that taste worth the suffering that pets go through? Hardly.

Scientists believe that people began making foie gras back in ancient Egyptian times. Near the ancient Egyptian settlement of Saqqara, archaeologists have found many drawings in which people fattened various kinds of birds. Most of the terrible torture was inflicted on geese. Apparently, they were force-fed ground grain, which had been previously roasted and soaked in water. Many other nations were involved, and in the 1980s the industrial production of foie gras was launched in France. This was facilitated by the opening of a large number of supermarkets, through which the delicacy was easy to sell for a fairly high price.

Interesting fact: foie gras is really very expensive. If you want, you can order it directly to your house — just 1 kilogram of this «pleasure» costs about 8,000 rubles. Those are the prices, at least, I was able to find on the Internet.

The Daily Mail recently published an article about the French company Gourmey learning to produce foie gras artificially. And that’s great news, because thanks to this, the suffering of geese and ducks may be coming to an end. In fact, the company is in the business of producing artificial meat — we have a good article on the subject. The technology for creating artificial foie gras is that scientists extract cells from a single fertilized egg and help them divide in a nutrient solution.

The process was described in detail by Gourmey head Nicolas Morin-Forest:

Bird eggs have stem cells that are able to freely divide and multiply in a nutrient medium. We extract them and put them in a controlled environment in which we regulate the amount of nutrients to activate different types of cells. In this way we can obtain liver cells or muscle cells. Then we harvest them and produce our products.

Sphero’s RVR Programmable Coding Robot Car Is $50 Off for Black...