It's not just storms that get picked up on weather radar, but sometimes trees, roadways and boats appear during a certain type of temperature fluctuation.

According to the National Weather Service (NWS), in "radar beam ducting," the beam bends back to Earth under a strong temperature inversion.

The inversion occurs when the surface of the Earth is cooler than higher up in the atmosphere. In a normal situation, the temperature is lower farther from Earth, the lower the temperature, according to NOAA.

The phenomenon usually occurs in the morning, when temperatures at ground level are cooler, causing the radar beam to be reflected toward the ground.

The phenomenon happened in May 2020 when cool temperatures settled across the Southeast and allowed forecasters to pick up something other than rain and thunderstorms in the New Orleans area.

"It may not look like much on radar this morning, but a pretty cool phenomenon is occurring right before our eyes," the  National Weather Service (NWS) forecast office in New Orleans said on Twitter. 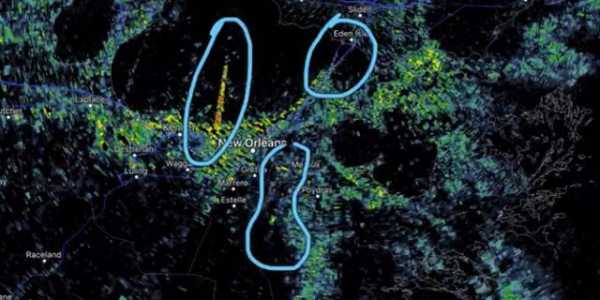 Large bridge in the New Orleans area and even some ships on the Mississippi River were picked up by weather radar on Monday.
(NWS New Orleans)

The radar picked up the Lake Pontchartrain Causeway and Interstate 10 Twin Span Bridge. The NWS said that even a few ships traveling on the Mississippi River near Belle Chasse could be spotted.

When a temperature inversion occurs, the air prevented from rising helps bend the radar beam. The NWS said in radar beam ducting, the beam "really bends more than normal."

"If the atmospheric condition that causes superrefraction bends the beam equal to or more than the earth's curvature then a condition called ducting, or trapping, occurs," the Weather Service states. "Ducting often leads to false echoes also known as anomalous propagation or simply AP."

Such echoes on radar would be the bridges or ships as seen in New Orleans.

A similar incident happened in November 2019, when a substantial plummet of temperatures in South Florida caused strange things to show up on radar.

The NWS office in Miami said at the time that strong temperature inversion caused the radar beam to bend toward the ground, where false echoes known as "anomalous propagation" were seen.

Trees, cars, and even a highway that runs from Miami to Lake Okeechobee appeared on radar.

“The beam is going out and bending down through the inversion so that it’s sampling targets at the ground,” NWS meteorologist Harry Weinman told the Palm Beach Post at the time. “We refer to those targets as false echoes. It’s just very different than the normal state of the atmosphere.”