Home Space and Ufo Galaxy Group 13 Billion Light-Years Away Could Be Ending the Cosmic ‘Dark... 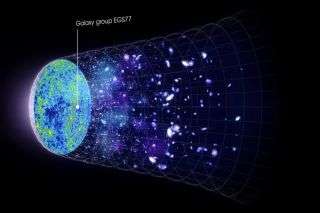 This illustrated map of the universe shows galaxy group EGS77 clearing away the cosmic fog of the early universe, some 13 billion years ago.

For hundreds of millions of years after the Big Bang, the entire universe was a thick soup of hydrogen atoms swimming in total blackness. So dense was this cosmic goulash that the first light from the first stars in existence couldn’t penetrate it — the hydrogen fog simply absorbed and scattered the starlight in circles, trapping the universe in a cosmic dark age as ever more stars, galaxies and black holes slowly smoldered to life.

That all changed after about 500 million years, when a grand cosmic makeover called the epoch of reionization began. As ancient galaxies grew ever larger and radiated more powerful energy, they began to burn away the cosmic fog that surrounded them by splitting (or ionizing) hydrogen atoms into a plasma of free protons and electrons. Suddenly, light could travel across the cosmos — first through “bubbles” of plasma surrounding large galaxies, then farther and farther as multiple bubbles began to expand and overlap.

Now, for the first time, astronomers believe they’ve detected three of those fog-clearing bubbles hard at work reshaping the universe in a group of galaxies 13 billion light-years away.

In a study that was presented this week at the American Astronomical Society conference in Honolulu and submitted for publication in a forthcoming issue of The Astrophysical Journal, an international team of astronomers identified a trio of faraway galaxies that seem to be radiating some of the earliest light ever observed. The galaxy group, named EGS77, dates to approximately 680 million years after the Big Bang (roughly 5% of the universe’s current age of 13.8 billion years) and appears to be surrounded by three overlapping bubbles of plasma — meaning these pioneering galaxies may have been caught in the act of reionizing their corner of the universe and bringing the cosmic dark ages to an end.

“EGS77 has formed a large bubble that allows its light to travel to Earth,” study co-author Vithal Tilvi, a researcher at Arizona State University, said in a statement. “Eventually, bubbles like these grew around all galaxies and filled intergalactic space, reionizing the universe and clearing the way for light to travel across the cosmos.”

To find these ancient fog-clearing galaxies, the researchers surveyed a small section of space for the precise wavelength of ultraviolet light emitted by the earliest stars, also known as Lyman-alpha emissions. The light begins at a wavelength of 121.6 nanometers but, after traveling for billions of years across the expanding universe, slowly stretches out into the near-infrared range (700 nanometers to 1 millimeter), which is easier to detect with Earth telescopes.

The survey turned up three overlapping specks of space that seemed to be emitting the exact wavelengths typical of ancient stars ionizing their surroundings. The team compared these observations with data from two other telescopes and confirmed the galaxies were about 13 billion light-years away, making them the farthest galaxy group ever detected and placing them right on the frontier of the epoch of reionization.

“EGS77 is the first galaxy group caught in the act of clearing out this cosmic fog,” study co-author James Rhoads of NASA’s Goddard Space Flight Center in Greenbelt, Maryland, said in the statement.