Home Space and Ufo In the vicinity of the galaxy М63 discovered 5 new dwarf galaxies. 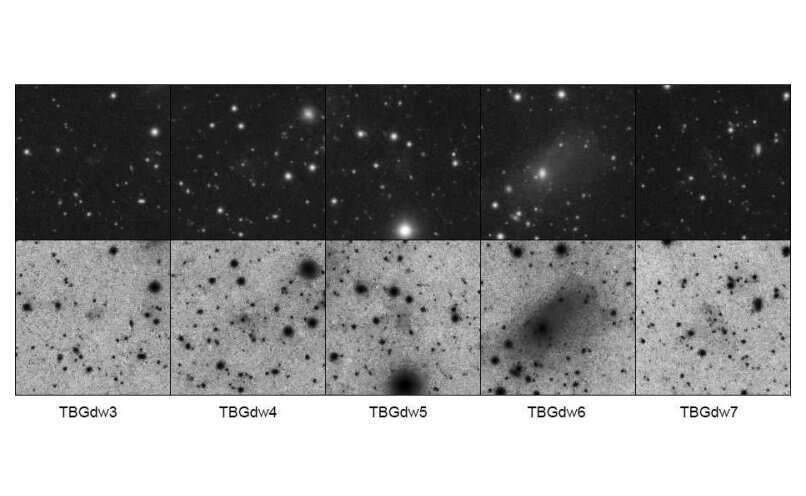 Using an amateur telescope with a 0.14-meter aperture, astronomers made observations of a nearby spiral galaxy known as М63. Observations revealed the presence of 5 new dwarf galaxies around the galaxy М63 and allowed researchers to determine their basic parameters.

Dwarf galaxies containing up to several billion stars each are difficult to detect due to their low brightness, small mass and tiny size. Astronomers usually detect such objects as satellites of larger galaxies. It is believed that the large galaxies observed today were formed either as a result of mergers with dwarf galaxies, or as a result of drawing material from these galaxies.

Located about 29.3 million light-years away, the galaxy М63, called the Sunflower galaxy, is a large spiral galaxy without a central jumper with moderately tight or freely twisted spiral sleeves. Previous observations of the galaxy М63 revealed the presence of numerous arcs and «jets» on the periphery, having low surface brightness. It is believed that this very dim system of stellar and gas-pollinated flows is the result of the accretion of the dwarf galaxy that has occurred over the past few billion years.

To date, several dwarf galaxies have been discovered in the vicinity of the galaxy М63, which can be its satellites. In a new study, a team of astronomers led by Igor Karachentsev from the Special Astrophysical Observatory of the Russian Academy of Sciences, located near Nizhny Arkhyz, added several new objects to this list. After analyzing a picture obtained using a 0.14-meter refractor TEC140ED APO, working in conjunction with the Moravian G3-16200 Monochrom CCD (KAF-16200) camera, the researchers discovered 5 new candidates for the role of galaxy satellites of the galaxy М63, which have low surface brightness.

These candidate galaxies received designations from TBGdw3 to TBGdw7. The largest in the list of 5 new dwarf galaxies, are galaxies TBGdw7 and TBGdw3, which have maximum angular diameters of 21.7 and 21.6 angular minutes, respectively. The tiny galaxy studied was the galaxy TBGdw6, which has a maximum angular diameter of about 18.5 angular minutes. Astronomers add that the status of a dwarf galaxy for the case of an object TBGdw6 requires further confirmation, since this source may turn out to be a section of the reflective nebula.