Home Space and Ufo Self-destructing dark matter may be flooding the sky with gamma rays, study... 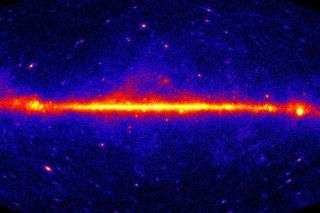 The sky is ablaze with explosive, invisible gamma-rays (shown here in yellow and red). According to a new study, some of those rays may be the products of dark matter.

Gamma-rays — the brightest, most powerful light in the universe — sail across the sky invisible to human eyes. These exceptionally energetic bursts of radiation flash out of supernova explosions, spark off of colliding neutron stars, and spew forth from the hungriest black holes.

When astronomers can catch them with gamma-ray telescopes, these invisible fireworks point toward some of the universe’s most explosive structures. Now, an international team of researchers hopes that those all-powerful rays could also lead to something far stranger and more elusive — the invisible substance known as dark matter.

In a new study accepted for publication in the journal Physical Review Letters, and detailed on the preprint database arXiv, the researchers looked at what they call the «unresolved gamma-ray background» — that is, all of the faint and mysterious gamma-ray signals that are left over after known sources like black holes and supernovas are accounted for. When the team compared a map of unresolved gamma-rays with a map of matter density in the same section of the universe, they found that the rays aligned precisely with gravitationally massive areas where dark matter was predicted to hide out.

According to study co-author Daniel Gruen, this correlation suggests that dark matter may be largely responsible for the universe’s faint gamma-ray background. If that’s the case, it could give astronomers some vital clues about the mysterious substance’s properties.

«Dark matter could decay like a radioactive nucleus, producing gamma rays as it does,» Gruen, an astrophysicist at the Department of Energy’s SLAC National Accelerator Laboratory at Stanford University in California, told Live Science. «Or perhaps multiple dark matter particles are colliding, producing gamma-rays as they interact.»

Ripples in the dark

Dark matter is thought to make up about 85% of the universe’s mass, though researchers still aren’t positive what or where it is. Totally invisible to modern scientific instruments, the stuff has never been successfully detected.

«We do know some of dark matter’s properties though,» Gruen said. «We know that it’s very common, and we know that it has mass that interacts gravitationally with other mass.»

In other words, even though dark matter is invisible, it makes a visible impact on the universe through its powerful gravity. One of those impacts is known as  gravitational lensing — essentially, how light from distant galaxies is warped by the gravity of the massive objects it passes on its way toward Earth.

For the new study, the researchers looked at a map of gravitational lensing in a particular chunk of the universe, compiled by a project called the Dark Energy Survey (DES). Mounted on a giant telescope in Chile, the survey’s dedicated camera spent a year snapping high-definition images of hundreds of millions of galaxies, focusing on where distant light is most misshapen by pockets of intense gravity. While some of the most massive regions on the resulting map correspond to known galaxies, other hefty pockets likely show the hidden influence of dark matter at work, Gruen said.

To better understand what that influence might look like, the researchers compared this mass map with a map of gamma-ray emissions detected in the same region by NASA’s Fermi gamma-ray telescope over the past nine years. Using a mathematical model, the team removed all radiation that could be definitively tied to «mundane» sources like black holes and supernovas, based on their energy output, distance and various other factors.

Now, left with only the mysterious «unresolved» gamma-ray sources, the team compared both maps. They saw a clear overlap between regions of high gamma-ray radiation and regions with lots of mass.

«This is the first study where we’ve been sure that, where there are a lot of gamma rays, there’s also a lot of dark matter,» Gruen said.

If dark matter truly is emitting gamma rays, that could seriously narrow down how it’s detected and what it’s actually made of. However, it’s still possible that the faint gamma-ray background on the Fermi map has nothing to do with dark matter, Gruen said. The mathematical model that the researchers used to weed out those «mundane» sources of gamma-ray emissions (such as black holes) is based on some assumptions about those objects’ properties.If those assumptions are wrong, distant black holes could be responsible for much more of the mysterious gamma-ray background than the researchers accounted for.

«Maybe that model is incomplete, and maybe we’re actually learning something about these gamma-ray-emitting black holes,» Gruen said. «Perhaps, these black holes are living in more massive galaxies than we thought.»

More data on both gamma rays and gravitational lensing will help the team hone their model and better interpret their maps of the universe. Since the study’s conclusion, the DES has collected six times more information on the universe’s mass distribution, and the FERMI satellite remains one of many telescopes tracking gamma-ray explosions. A follow-up study showing even clearer results should follow in the next few years, Gruen said.